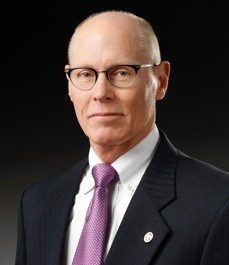 Kenneth Schutte ‘68, has throughout his life been one of the truly high achievers in the banking world, has represented his country as an officer in the U.S. Navy, and served as a member of the Peace Corp.

At the apex of his career in 2010, Ken retired as a General Partner of the prestigious Edward Jones Company, then a $7.4 billion asset retail securities brokerage firm operating in th

e U.S. and Canada with some 12,000 advisors, 7.3 million client accounts, and $526 billion in assets. He also served as Director and Treasurer of Edward Jones Trust Company, and as treasurer of two captive insurance companies.

Upon graduating from Purdue with a degree in Industrial Engineering, Ken entered the Peace Corp where he consulted local businesses and taught advanced business practices at a local university in Colombia, South America. In 1969 he joined the U.S. Navy achieving the rank of Lieutenant in the Navy Civil Engineer Corps while stationed at the Naval Academy.

Following his military service Ken attended Harvard for an MBA in 1974. In 1995 he attended the Stanford University Graduate School of Business, Financial Management Program; and received a Certificate from the Wharton Securities Industry Institute in 2004.

Brother Schutte worked for Continental Illinois National Bank & Trust of Chicago from 1974 to 1985. During this period he led their corporate banking activities in the St. Louis Federal Reserve District after being named Vice President of the Latin American Division where he oversaw all his bank’s activities in Argentina, Chile, Uruguay and Paraguay. 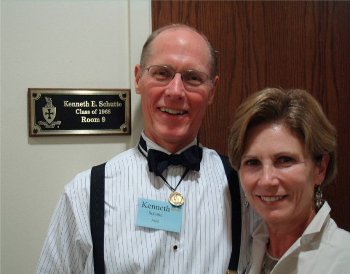 Ken and his wife, Pat, at the Chapter House Rededication in 2007. Ken was the class leader in this campaign for the Class of ’68.

In 1985, he joined Mercantile Bank Corporation, Inc., St Louis, achieving the position of Senior Vice President and Treasurer. His staff of 40 people managed a $9.0 billion investment portfolio. In 2000 he joined the Edward Jones Financial Group where he retired as a General Partner.

Today Ken is an adjunct professor at Lindenwood University, St. Louis, teaching a Financial Market and Institutions course in the Master’s degree program. He currently serves on the Board of St. Louis Public Radio; and previously served on the Board of the St. Louis Chamber Chorus and Thompson Foundation for Autism. Ken has also participated in the God’s Child Project and Habitat for Humanity building homes in Guatemala and El Salvador.

Ken has completed several marathons, triathlons and many long distance benefit bike rides. He also enjoys tennis, skiing, backpacking and fly fishing. His wife, Pat, of 48 years joins him in several of these pastimes.

We are excited to recognize Brother Schutte for his life-long accomplishments and his commitment to Delta Delta as our chapter’s 49th Significant Sig.