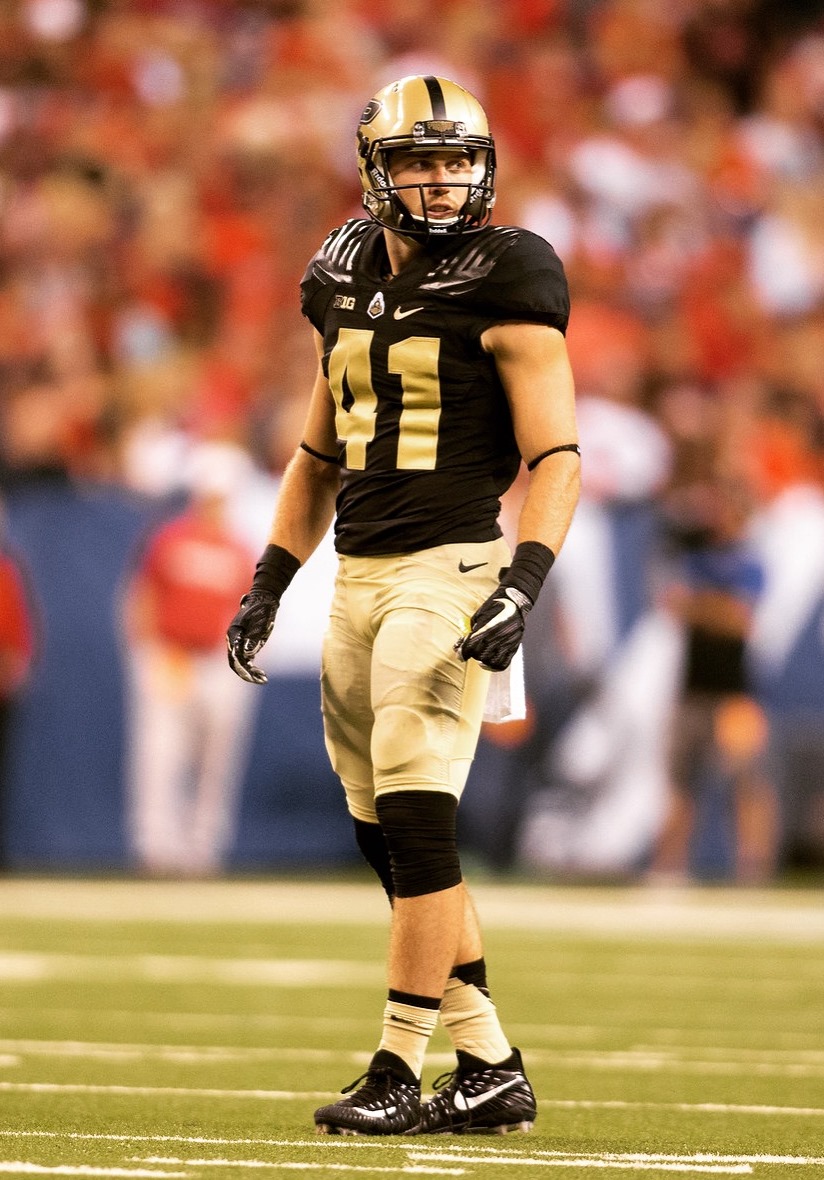 For starting safety #41 Jacob Thieneman ’18 there is nothing like playing in Ross Ade in front of all the fans.  Jake stated, “I will never forget my first time running out on that field as a true freshman.  Running through the smoke to all the fans cheering for you is amazing.  It’s surreal going out as the starting safety.  I’ve worked so hard to get to this point so every time I step on the field I get an overwhelming feeling of accomplishment.  Hearing all the fans screaming while playing feels amazing as well.  I love hyping up the crowd on third down!  And nothing compares to hearing the crowd roar after I make a play. That is truly the best feeling.”

Jacob Thieneman ’18, has been part of several personal comebacks, but as the starting safety for Purdue’s rejuvenated football team, he may be part of one of the biggest single season turnarounds ever.  A key contributor to Purdue’s revamped defense, Jake at 6’1”, 210 lbs. has started every game and has accumulated 74 tackles (47 solo; 27 assists); 1 interception; 1 fumble recovery; 5 tackles for a loss, and 2 sacks.  For his contributions, Jake earned All Big Ten Honorable Mention recognition.

When asked, “What is different about this year’s team under new head coach Jeff Brohm?”  Jake responded, “This year’s team is without a doubt different than previous years. The new coaching staff brings a different energy. They focus on the right things to make us better and they bring an intensity and competitiveness that we didn’t see in previous staff. We know as players they are taking us in the right direction. As a team, we’ve rallied around our seniors and our coaches and we were determined to show everyone we are not the same team as years past.”

Walk On to Starter

Jake stretching out for an interception against Illinois.

Jake’s own road from walk on to starter has had numerous ups and downs.  He reflected, “I wasn’t a highly recruited player and I didn’t have any Division I offers, so I wanted to prove I could play in the Big Ten.  It was a long road to get here and there were times I doubted if I would be able to make it, but through it all I kept my head down and kept working as hard as I can to make myself better.  Instead of worrying about things out of my control, I focused on what I could control and that was how hard I worked and how I performed on the field. I knew I would get an opportunity eventually and I needed to be ready when that opportunity came.”

Over the past three years Jake has had a number of setbacks.  In his true freshman year he broke his right foot in offseason workouts and missed all of spring practice. It required surgery and a screw to be placed in his 5th metatarsal. Then the following year, he had the same injury to his left foot during spring practice, which again required surgery and a screw.  Again he missed the spring game that year. In the second week of practice this past spring, he broke his left hand.  Yet another surgery, with a plate and 7 screws placed on his second metacarpal (index finger).  Jake returned to spring practice three weeks later, only to break his collar bone three days after that diving for an interception in a scrimmage. His collar bone needed a plate and 12 screws, bringing his grand total to 2 plates and 21 screws and missing all three spring games since being on campus.  Jake remarked, “Through all the injuries, I always told myself I’d be back.  I’ve had plenty of opportunities to quit, but I never let the adversity get the best of me. I pushed through, built myself back up, and made it on the field.”

When asked what role Sigma Chi had played in his football experience, Jake commented, “Sigma Chi and my pledge class specifically have been a big part of my football experience. They’ve shown a tremendous amount of support along the way, especially through all the injuries. Once I started playing they would all go to the games to cheer me on. They also served as a source of motivation because I wanted to make it on the field for them, to make them proud of their pledge brother/brother.”

Jacob is a senior academically and will graduate next December with a degree in mechanical engineering.  As a redshirt junior on the football team, Jake still has one more season to go.  His home is in Carmel, IN and he attended Guerin Catholic High School.  Last year Jake earned Academic All-Big Ten honors.

I really enjoyed reading the article. I admire your tenacity and courage to fight through the adversity. I’m going in for surgery this morning to repair a broken ankle and I’ll draw inspiration from your triumph.

Hi Russ, It is good to hear from you. I am interested in Delta Delta sigs that are on the football team also.

Hey jake,it was a pleasure watching you play over fathers weekend and hanging out with you at the house.dont give up the oak bucket.keep kicking ass.BOILER UP!!!