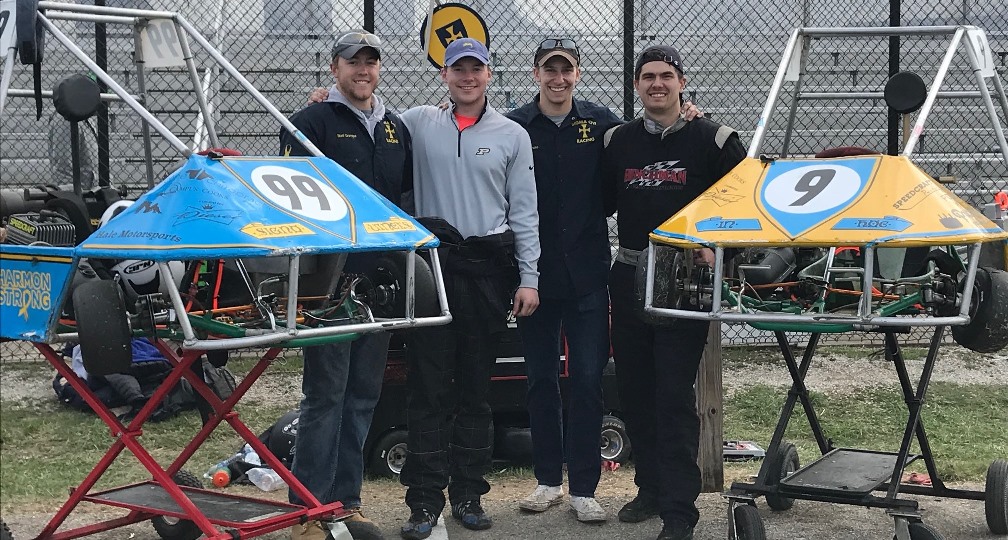 Luck Not On the Side of Sigs in 2018 Grand Prix

Sometimes the only luck you get is bad luck.  That seemed to be the case for the two Sigma Chi karts and their drivers in this year’s Grand Prix race run on April 21.

In early practice runs Nick Hale ’18 in the Sig Kart #9 and Spencer Meredith ’18 in the #99 kart, both ran very consistent lap times.  Throughout the practice period and leading into qualification runs inclement weather forced schedules to be adjusted.  Running on a wet track also led to safety concerns and this caused delays and limited all drivers in their preparation.

Each team’s pit crew was able to adjust the karts for the optimal rain settings during the pre-qualification practice runs. Within the first few practice laps Nick in the #9 kart lost traction and ended up in the grass.  Some adjustments were made prior to qualification runs to prevent this from reoccurring.  The #99 kart with Spencer driving had better luck and was clocking some of the fastest times he had run up to this point. 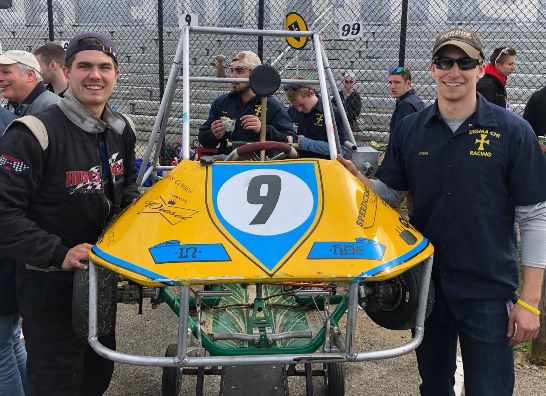 Driver Nick Hale (L) and Crew Chief Nate Graber ready the #9 kart for one more run for the checkered flag.

Prospects for a strong performance in this year’s race looked promising with both kart teams being led by seniors who had been part of three previous Grand Prix races.  Nate Graber ’18 teamed with Nick on the #9 kart, and Will Todd ’18, along with crew chief Richard Chen ’19, worked with Spencer.

During qualifications both karts ran into bad luck as the #9 kart’s engine cut out and the #99 kart ended up in the grass as it swerved to avoid a collision and one lap later had its chain break ending its qualifying efforts.  Even with these mishaps Nick qualified 18th and Spencer was one position behind in the 19th spot.

Both driver’s had some setbacks during the race but both finished.   Kart #9 was clipped in the back wheel sheering the bolts in the wheel hub.  After some delay while the wheel was replaced Nick reentered the race and finished in 9th place.  The #99 kart was involved in an accident that broke both of the kart’s tie rods which meant all steering was lost.  After missing around 40 laps as the kart was repaired, Spencer was able to get back in the race and recovered to finish 18th. 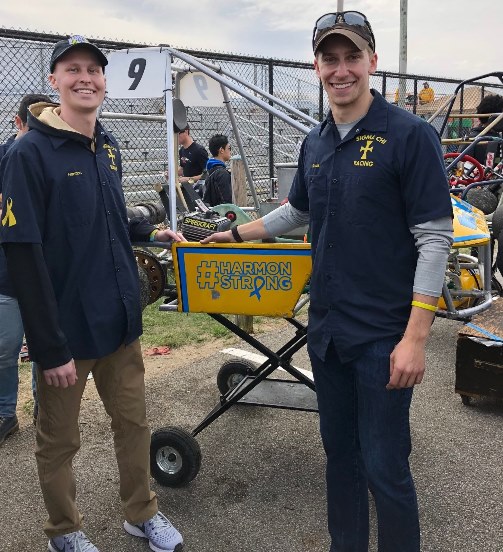 Delta Delta throughout Grand Prix has supported Ben Harmon ’21 (L) with Nate Graber in his fight against cancer.

We want to thank our alumni who contributed their time and/or resources to support our Grand Prix teams.  Sheldon Alt  ‘10 , who served as a mentor throughout the season, returned to Purdue and helped coach the team during the race.  Also contributing were Greg Burns ‘14, Charles Carpenter ‘17, Dexter Odle ‘17, Spencer Owen ’16, John Hettinga ‘15, Kyle Johnson ’17, Alex Dexeus ’15, Brian Wihrhahn ’15, Mack Hamilton ’14 and David Evans ’14.

The chapter also took this opportunity to show our support of Brother Ben Harmon ’21 who is currently undergoing treatments for cancer.  We promoted our Harmon Strong campaign to raise funds for his treatments during Grand Prix.  We want to thank all those who contributed and helped pull this effort together.