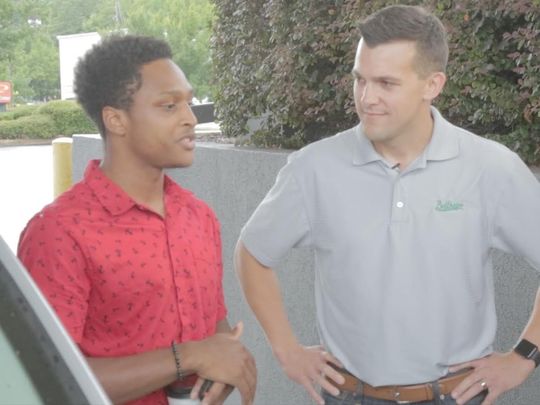 Luke Marklin ’07, who is the CEO of Bellhops Moving, recently made a big splash in the news with this story as reprinted from the Indy Star (7-17-18).

When Purdue University graduate Luke Marklin learned that one of his newest employees was willing to walk 20 miles to work on his first day just to prove his dedication, the Boilermaker knew he had to find a big way to thank him.

So what’s bigger than driving from Tennessee to Alabama to gift that employee a new car?  “I think he was pretty happy,” Marklin said. “His resolve to get through challenges is just something that legends are made of, really.”

The now-viral story of Walter Carr, a 20-year-old college student from Alabama, began Friday. That was the day his 2003 Nissan Altima broke down, and the day before he started work as a mover at Bellhops moving company.

Unable to secure a ride from his friends or girlfriend, Carr determined it would take him about 7 hours to walk from his home to where he needed to be on his first day. So around midnight, Carr started his 20-mile trek. “I wanted to be there before 8,” he said. “I wanted to beat the crew members there to let the company know how dedicated I am.”

He made it about 14 miles when police officers stopped him on the side of the road around 4 a.m. After hearing his story, the officers took him to breakfast at Whataburger, drove him to a church to rest and said they would send someone to check on him. A short time later, another police officer pulled up and gave Carr a ride to the home of Jenny Hayden Lamey, who Carr was scheduled to help move that day.

After the moving job was done, Lamey shared Carr’s story on Facebook. She said she learned that Carr is a Marine, and that he and his mother moved to Birmingham, AL, after losing their home in New Orleans during Katrina. “I just can’t tell you how touched I was by Walter and his journey,” she wrote. “He is humble and kind and cheerful and he had big dreams!”

Lamey’s post went viral and got the attention of Marklin, the Bellhops CEO. Marklin said he started getting texts about Carr and got his team together to figure how they could thank him. “Just sitting there reading it, I was just blown away,” Marklin said. “The more we learned, the more we realized Walter was just a special person.”

Marklin met Carr on Monday to thank him and decided to give him his personal Ford Escape. Like Lamey, Marklin said he was impressed by Carr’s determination. “It was wonderful to get to know him. Walter is a person who has had adversity throughout his life,” he said. “I don’t think Walter … was ever going to let not having a car get him down.”

Luke Marklin’s Background
Luke Marklin is a 2007 graduate of Purdue’s Construction Engineering and Management program. After earning his bachelor’s degree, he worked as a project manager for Barton Malow, a commercial construction company. Wanting to round out his engineering background with a set of strategic and financial tools, Luke left Barton Malow to attend Harvard Business School.

In a note to his Sigma Chi brothers, Luke commented, “Going through Sigma Chi, you learn a set of values that carry with you the rest of your life.  Walter’s scenario was unique and I was fortunate to be in a position to help.  My strong hunch is that there are many other brothers out there that would do the exact same if presented with the opportunity.”

After earning his MBA, Luke worked as a corporate strategic planner for Emerson before moving to Uber as the General Manager of the Southeast markets. He became the CEO of Bellhops in 2017 as the company transitioned out of its startup phase.