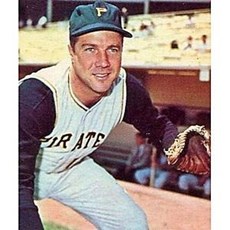 Significant Sig Robert Friend ’53 entered Chapter Eternal on February 3 at the age of 88.  Bob played 15 years with the Pittsburgh Pirates, making four All-Star appearances and fronting the rotation on the World Series-winning 1960 team that defeated the New York Yankees in seven games.

Robert Friend was born in Lafayette, IN and grew up in West Lafayette.  He was a baseball and football star at West Lafayette High School. Bob enrolled at Purdue in the fall of 1949, where like his father and several siblings had previously, he planned to play on the football team. A shoulder injury, however, made him choose between football and baseball, and he signed with the Pirates organization before the 1950 season. After just two years in the minors, he was promoted by Branch Rickey to join the Pirates’ starting rotation.

The Warrior was One of the Very Best

“Bob was truly one of the very best to ever wear the Pirates black and gold”, stated Pirates president Frank Coonelly.  Bob was 20 years old when he made his major league debut with Pittsburgh in 1951. He had his first winning season in 1955, his fifth year with the Pirates. The Pirates finished in last place that season, but Bob went 14-9 and became the first pitcher to lead the N.L. in earned run average on a last place team when he posted a 2.83 mark. He also led the National League in starts (42) and was chosen for the National League’s All-Star team that year.

Known as the “Warrior” for his amazing durability, Bob never missed a start in his 16 year baseball career.  He led the league in innings pitched twice, totaling almost 600 innings through 1956 and 1957, and led the N.L. in games started each season from 1956 to 1958.

“I had a real good sinker that carried me through most of the prime of my career,” Bob recalled in an interview with Clifton Parker for the Society for American Baseball Research. “I had also had a hard curve and a fair off-speed pitch, but it was the sinker more than anything else.”

Bob pitched in 568 games over the span of 15 seasons with the Pirates.  He won a career total of 197 games and still holds the Pirates franchise record for career innings pitched (3,481), games started  (477) and strikeouts (1,682).  In 1960 Bob led the Pirates to the World Series Championship when he won 18 games, posted an ERA of 3.0, had 183 strikeouts, while leading the team in games started and innings pitched.

Bob was the Pirates opening day starter seven times. He won two All-Star Games, and he beat the New York Giants, 9-1, in their last game at the Polo Grounds on Sept. 29, 1957.  Another famous first: On April 13, 1963, Bob gave up a leadoff triple in the eighth inning to a Cincinnati Reds rookie named Pete Rose — it was the future hit king’s first career hit.

Bob became a Yankee before the 1966 season. He posted a 1-4 record before they sold him to the Mets in June. He went 5-8 for them to close out his career.

Perhaps one lifelong fan summed Bob’s career up best when he posted on one of Brother Friend’s obituaries, “On teams that were arguably among the worst in baseball for years, he was our Warren Spahn, Drysdale, Roberts, Koufax. How he was able to effectively pitch all those years knowing that his support was meager at best is hard to comprehend. Listening to all those games pitched by Bob and described as only Rosey and Prince could, brings back great memories from my youth. Sometimes the word warrior is overused, but to me he fit the definition to a T. To me, one of the greatest Bucco’s of all time. Rest in peace.”

Brother Friend went on to a successful career in the insurance business in the Pittsburgh area and served eight years as Allegheny County controller, from 1968 until 1976. He is survived by his Sweetheart of 61 years, Pat.

Days (and Years) at Delta Delta

The brothers living in the chapter house during the early and mid ‘50’s recalled that Bob took a few extra years to get his economics degree.  He returned to Purdue for seven off seasons when he would attend classes during the fall semester before going back to spring training for the upcoming season.

Bernie Sergesketter ‘58 recalls, “When Bob went to Purdue, the fall semester began after Labor Day and the baseball season ended shortly after that …. so Bob was able to get his Purdue degree by going to eight fall semesters starting in 1949.  His last two semesters were in the fall of 1955 and 1956, during my sophomore and junior years.  At the time we only had one television set in the Chapter House, and it was in the Library.  Also, in those years there were no night games.  During the World Series Bob would watch every game in the Chapter House Library with a group of us joining him.  He would tell us about every National League batter and his tendencies when he came to the plate, as he had pitched against each of them.  It was really enjoyable to watch these games with one of the outstanding pitchers in Major League Baseball.”

Bob’s Purdue background followed him to Pittsburgh where fans remember the local radio announcer yelling when Bob hit one of his rare doubles, “Friend steams into second like a Purdue Boilermaker”.

All honor to his name.