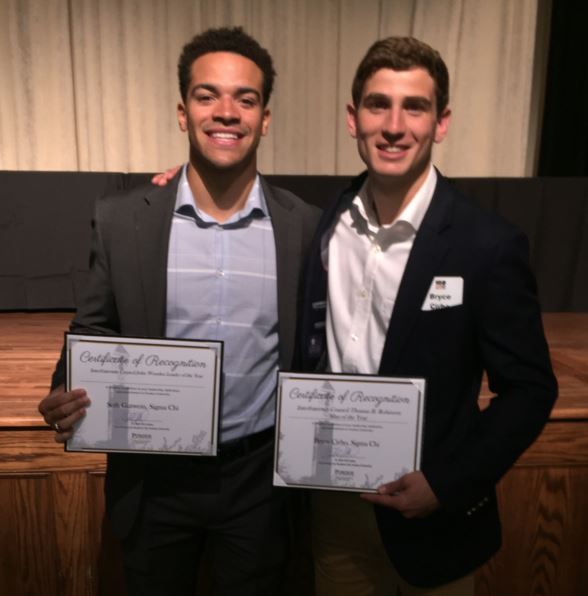 At the recent IFC and Pan Hel awards two Delta Delta brothers walked away with top honors.  Byrce Cirbo ’19 was chosen as IFC’s Brother of the Year and Man of the Year. Seth Gutwein ’19 was recognized as IFC Leader of the Year.  Both brothers have held multiple positions on campus as well as within Delta Delta.

Bryce has served as Consul, Pro Consul, Risk Manager, Chaplain and Alumni Relations Chair. He has also attended Horizons Leadership Summit and participated in two Balfour Leadership Training Workshops.  According to current Consul Wes Middleton, “Bryce is the type of person that is always willing to go the extra mile for his brothers and friends. He has a genuine passion for assisting others in any way that he can. He is as well-rounded as an individual can be; his dedication, congeniality, and his passion for others are what make him the “glue” that keeps our chapter together.”

Byrce has also become a respected leader on campus. He has worked as a Purdue University Engineering Ambassador, served as IFC Vice President of Risk Management, and volunteered to tutor younger students in the greater Lafayette community in Spanish.  Bryce is receiving his degree in Mechanical Engineering and will begin working for Cummins Engine in Columbus, IN in July.

Seth has been very active on campus serving as IFC President, a member of Mortar Board and Old Masters Central Committee. During his tenure as IFC President he led the Greek community through some challenging times. Within the chapter, he has served as Pro Consul, Risk Manager, Philanthropy and Alumni Relations Chair. Through his leadership the chapter for the past two years has raised over $20,000 each year for the Huntsman Cancer Institute.

Wes Middleton stated, “Seth doesn’t need a title to be a leader in our house. He is someone that I have constantly turned to for advice since being elected Consul and is someone who always provides great insight at chapter meetings, going above and beyond what is expected from him in the house.”

Seth is receiving his degree in Management and will be taking part in the Orr Fellowship Program and working with Roche Diagnostics in Indianapolis.