Jim Vruggink ’70 (Central Michigan) has served as Delta Delta’s Faculty Advisor for the past 13 years until his retirement from Purdue on Aug. 31 from his position as Manager of Special Projects in Intercollegiate Athletics and  Public Affairs.  He turned over the faculty advisory duties to Mark Herrmann ‘81.

Jim has worked tirelessly on behalf of the young men of the chapter by continually monitoring and addressing the chapter’s GPA and academic standing in Purdue’s Greek community. Jim also took an active role in pushing the chapter to increase its philanthropic activities.

As Jim departs the chapter’s academic standing is strong and Delta Delta was recognized at State Day with the Richard Hester Philanthropic Award. For the second year in a row the chapter has raised over $20,000 for the Huntsman Cancer Institute.

Jim has been at Purdue for the past 37 years serving in a number of Intercollegiate Athletics and Public Affairs roles. Highlights have included coordinating Heisman Trophy campaigns for Jim Everett ‘86 (6th in 1985), Mike Alstott (11th in 1995) and Drew Brees ’01 (4th in 1999 and 3rd in 2000). Jim has also served as Executive Director of the National Football Foundation’s Joe Tiller Chapter of Northwest Indiana since 2004. In this role he has provided learning opportunities for a number of Delta Delta undergraduates who have helped Jim in different capacities.

Jim started at Purdue in 1982, serving as Sports Information Director for four years and Athletic Public Relations Director for 15 years before becoming Director of Special Projects for University Relations and Intercollegiate Athletics in 2001.  Prior to his time in West Lafayette, Vruggink was SID at Northwestern University (four years), assistant SID at University of Michigan (four years) and sports editor at the Ypsilanti Press (2 1/2 years). 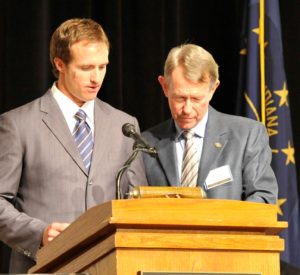 He is a former president of the College Sports Information Directors of America (CoSIDA), having led the national organization in 1996-97 and spending 1993 through 2000 on its board of directors. While on the board, he assisted in the development of a new mission statement for CoSIDA and led other initiatives that helped the organization adapt for the 21st century.

Vruggink received the NIT-CoSIDA Presidential Citation in 1997 and the Scoop Hudgens Lifetime SID Award from the All-American Football Foundation in 2002 prior to being inducted into the CoSIDA Hall of Fame in 2004 when he became just the second Boilermaker chosen and just the eighth Big Ten person so honored.  In 2012, he became the 52nd person honored by his alma mater, Central Michigan University, with induction into its Journalism Hall of Fame. A 1970 CMU graduate, he majored in journalism and was the student newspaper’s sports editor and an SID student assistant. 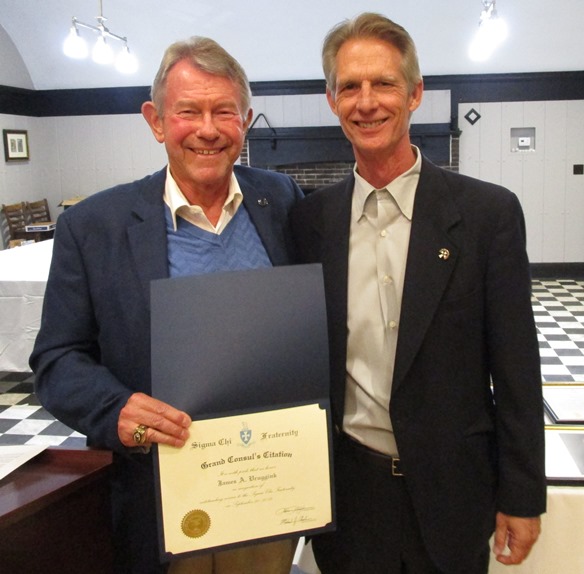 Jim, left, was presented a Grand Consul’s Citation by Phil Steele for Jim’s many contributions to Delta Delta as its Faculty Advisor.

A Life-Loyal Member of Sigma Chi Fraternity and an elder in his church, he is also a member of the John Purdue Club and the Purdue President’s Council. He has served on the Executive Board of the Gale Sayers Center in Chicago (five years) and as advisor for three student organizations – Delta Delta Chapter of Sigma Chi Fraternity (13 years), the Gimlet Leadership Honorary (13 years) and Purdue Gold Standard (seven years). He is still Executive Director of the National Football Foundation’s Joe Tiller Chapter of Northwest Indiana (since 2004), but plans to evolve out of that role in the next few years.

Jim is a tremendous example of someone who has given unselfishly to Sigma Chi wherever his career has taken him. We are extremely grateful for his contributions to Delta Delta.