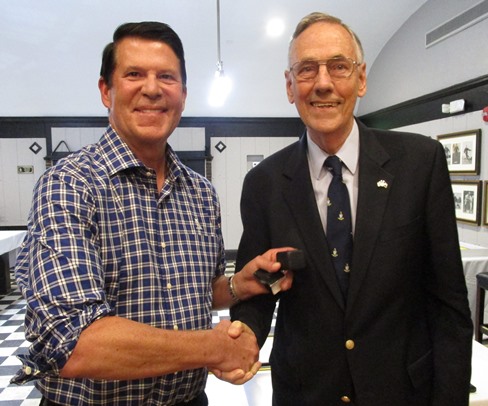 Bernie Sergesketter earlier this year was recognized as a member of Sigma Chi’s recently created Founder’s Circle.  This recognition is given to those few members who complete the Triple Crown of giving back to our Fraternity.

A Lifetime of Service to Sigma Chi and Delta Delta

There are very few brothers who have given so much time and energy to Delta Delta.  Bernie’s leadership throughout the chapter house renovation campaign continues today as he leads our efforts to secure Delta Delta’s future through the Annual Fund.  Bernie’s generosity of his personal resources, and more importantly his time, has helped maintain our Fraternity’s and Chapter’s high standards.

64th Grand Consul Keith Krach ’79 presented Bernie with his Founder’s Circle ring at the Significant Sig Honors Dinner on October 11, 2019.  We are eternally thankful for Bernie’s unyielding commitment to Sigma Chi, and his willingness to pay it forward for future generations of Sigma Chi’s.