Several Delta Delta pledge classes gathered at Homecoming this year to celebrate milestone reunions.  This included the Class of ’79 (40th), Class of ’89 (30th) and Class of ’94 (25th).  Each class spent time at Delta Delta and enjoying the memories our grand ol’ chapter house invokes.

Class of 1979 Reunion as reported by Corby Bain 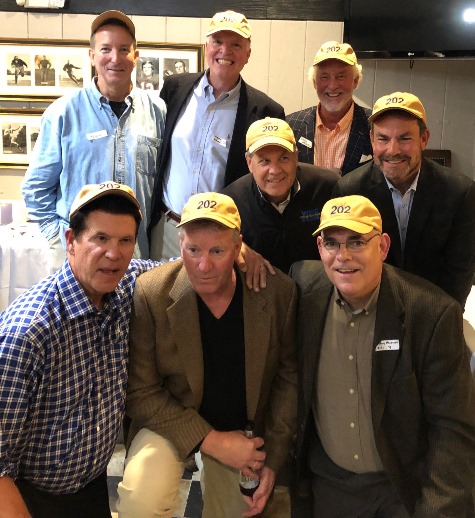 Forty years had not dimmed the enthusiasm of the brothers of the Class of ’79. Following the Significant Sig Honors Dinner held Friday evening, they made their way to Whiskey Bob’s Saloon in Lafayette and took advantage of its extremely generous closing time of 3am.

While an early wake-up call the next morning evoked foggy memories of a 3XSSNC in the cold-air dorm, the effort was rewarded when the class rendezvoused at Mackey Arena at 8:30am where Roscoe Holloway had arranged a behind the scenes tour of the Purdue athletic facilities.  Glenn Weckerlin took his turn at the weights normally used by the football team but alas, found them to be immovable.

Following the victorious Homecoming game, a happy bunch of Sigs and Sweethearts ventured across the river once more to Nine Irish Brothers pub in Lafayette.  There a private room had been arranged to keep the noise down, and it was a good thing once Keith (Hermie) Holcomb summoned his photographic memory to replay humorous events which had occurred at the Sig House over four decades ago.

After an impromptu Fire Drill from Steve Schmidt ‘76 (whose field goal by the way beat Notre Dame in 1974), we heard many more stories and toasts.  At some point the Bro’s of 1979 dispersed into the night with promises to keep in touch and do it all over again soon.

Class of ’89 Reunion as reported by Tony D’Eramo

Six of us brothers from the Class of ’89 visited Purdue for Homecoming on October 12th for our 30th reunion.  Ted Lorts – Muncie, IN; Eric Westergren – Cleveland, OH; Mike Martin – Carmel, IN; George Konoval – American Canyon, CA; John Salsberry – Rochester Hills, MI; and Tony D’Eramo – Carmel, IN, made it back to catch up on old times.

Between Teays River Brewing on Friday (and Saturday evening) and the tailgate / football game Saturday we shared many memories from pledgeship and living at 202 Littleton.   We also spent several hours in the afternoon at the house chatting with the active brothers and hearing their (very familiar) stories.

Class of 1994 Reunion as reported by Dave Nuhfer

We had a great time at Homecoming weekend. We met up at 9 Irish Brothers on the Levee for dinner Friday night then ended up over at the house to spend time with the current brothers and their guests and even danced to some old 80’s songs.  Saturday morning we met at Delta Delta for some pics and then headed over for some tailgating. We then cheered the Boilers on to victory over Maryland, tailgated some more and then met at Town and Gown Bistro for dinner Saturday night. 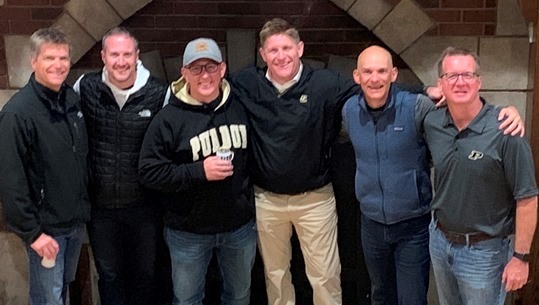 We all agreed on 3 things:  1. We were amazed at how fast 25 years flew by us. 2. We all felt as though we were coming home and that when we walked into the chapter house, it was as though we never left. 3. We will work to do a better job to see each other and stay connected.

A Big Thanks To Our Reunion Classes

The undergrads would like to thank the many alumni who returned for Homecoming.  We truly enjoy meeting you and having you share your Delta Delta memories with us.  We look forward to your return.  You are always welcome at 202 Littleton.