Over the semester break Butch Brose ’09 was busy tackling a couple of projects with historical connotations.  These projects included refurbishing the Game Room marble floor and relocating the Rolling Peanut Pub bar within the basement Activity Room. 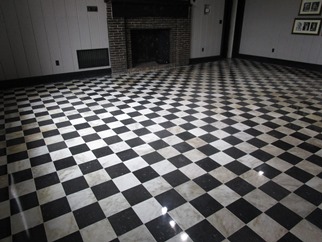 The refurbished Game Room floor has regained its luster.

From the earliest photographs of the Chapter House the checkerboard floor design in the Game Room makes a distinct impression.   The black and white checkered design has stood the test of time although some of the floor’s original luster had become discolored and faded.

With the generous support of Mike Campbell ’68 the Game Room floor was refurbished over the recent semester break.  A restoration specialist diligently removed the top 1/16 inch of the marble tiles and then honed, repaired, polished and sealed the marble surface.  Having this work done will also preserve the marble and help keep it looking this way longer.

Was the Game Room Floor Always Made of Marble?

The original floor that was put in during the 1912 construction of the chapter house was the same black and white checkerboard design we have today.  It was made of Rosstone, a product made in Lafayette that was some type of coated concrete tiles.  Over time a crack in the floor developed from the center of the fireplace to the Great Hall.  Over the years one side settled and that left a trip hazard (according to the insurance company inspector), so the floor needed to be replaced.  The House Corporation decided to tear out the old floor and put in a new one in 1967.

According to Brother Campbell, “They hired Jim Butler ’67 to do the demolition and put in a new concrete base.  They charged me, as house manager, to obtain the new flooring.  The old concrete base was a foot thick and it took Jim almost a month of jack hammering to get the old floor out.  It was hauled though the windows onto a sled and then down the hill to a truck on River Road.  I called Rosstone and they didn’t make the floor tiles anymore.  Since the House Corp wanted to maintain the checkerboard look, I called a local flooring company and they suggested marble or terrazzo.  I said marble would be great and they priced the job at $2400. (This was the summer of 1967.) Seeing no problem I told them to go ahead and install it when the concrete removal and new base were completed.  All went well and the floor looked great.  When the House Corp got the bill a few of its members were a little upset at the price, but in the end all was resolved.” 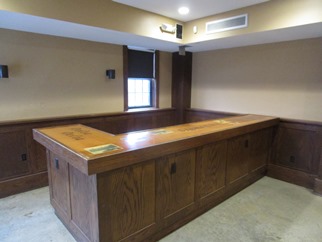 The bar in the Activity Room was relocated to open up the room.

The Rolling Peanut Pub, Delta Delta’s in-house bar, once resided in what is now the Eldridge Room. It served as a gathering place for the brothers for almost two decades.  During the 2006-2007 renovation of the chapter house the Rolling Peanut Pub was relocated to the new Activity Room in the basement.

For the past 12 years getting the Activity Room designed so it appeals more to the social needs of the undergrads has been a challenge.  Following recent input from the active chapter, the bar itself has been moved from the middle of the room to the east end of the Activity Room.  The goal is to open the room up more so it can be used to host smaller social events and pledge class gatherings.  This also takes some of the wear and tear off the Great Hall where most of the chapter’s social functions are held.

According to Butch Brose, who managed the project, this was not any easy task, and one that is not likely to be undertaken again.