Bump was a former Purdue football halfback, basketball guard and baseball shortstop/outfielder. He earned a pair of varsity letters in football at Purdue (1943-44), including playing for the undefeated 1943 squad that finished the season 9-0 and tied for the league championship.

Brother Elliott entered the Marine Corp and served in the Pacific during WWII.  He returned to the University of Michigan where he was an All-American two-way halfback on Michigan’s 1947 Rose Bowl and national champion team, the Big Nine’s most valuable player and captain of the College All-Star football team.

Elliott would go on to serve as the head football coach at Michigan from 1959-68, after stints as an assistant coach with the Wolverines, Oregon State and Iowa. He led Michigan to the 1961 Big Ten championship and Rose Bowl victory.  In 1970 Bump became the University of Iowa’s athletics director until retiring in 1991.  Brother Elliott is a member of the College Football and Rose Bowl Hall of Fames. 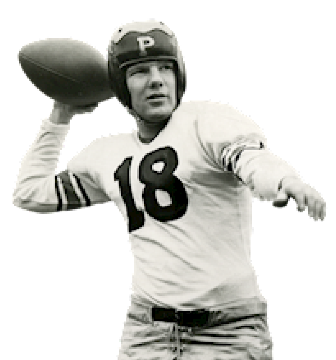 Elliott during his playing days at Purdue.

University of Iowa President and Delta Delta Sig Bruce Harreld ’72 remarked, “I met Bump several times as he retired in Iowa City and I would often run into him as I give several “state of the university” talks a year in the local community; and, several times Bump would show up.  And, yes of course we both discussed DELTA DELTA.  He was especially fond of our local chapter and was particularly impressed with the renovation work we did to bring 202 back to solid shape.”