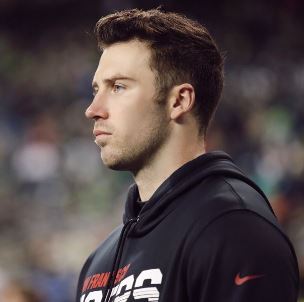 Jacob Thieneman ’19, was one of two Boilermakers to make the trip to Miami as members of the San Francisco 49er Super Bowl team.  Running back Raheem Mostert was the other. Jake is a member of the 49er practice squad so he didn’t get to suit up, but was on the sidelines in an exciting game that had the 49ers come up short.

Something You Dream About As A Kid

In an interview with Gold and Black Associate Editor Tom Dienhart Jake stated, “This is so far and above what I thought was possible. It’s something you dream about as a kid. You take one step after another. And the next thing you know, you are days away from boarding a flight for the Super Bowl.”

During his time at Purdue, Jake became a captain and a key member of the Purdue secondary. The 6-1, 215-pound Noblesville, IN., native left campus with 170 career tackles and three interceptions along with seven sacks and 12 TFLs in 24 starts. Best of all: Thieneman departed with a degree in engineering.

Jake went undrafted in 2019 but signed a free-agent contract with the Giants where he suffered a meniscus tear in a knee during their May mini-camp and subsequently was released. Jake got healthy and joined the Colts late in camp, taking part in Indianapolis’ final preseason game, before being released.

During the season Jake worked out for the Browns and 49ers, and ultimately was signed by San Francisco in Week 13.

Regardless of how long his stay is with San Francisco, Jake is learning from and enjoying his time with his fellow teammates. Being part of a Super Bowl team just adds to his overall experience.

For trivia buffs:  Purdue at 21 consecutive years now has the longest streak of any college whose former players are part of a Super Bowl team.