“Paul M. Kuhnert, MD, PhD, JD is unique – I know of no other scientist with such an extensive background, including three graduate degrees and accomplishments in both academics and industry.  He has clearly excelled at both.  His dedication to our fraternity make him an even more obvious choice for designation as a Significant Sig,” wrote pledge brother and Significant Sig N. Reed Dunnick ’65.

Paul’s passion for lifelong learning has earned him three doctoral degrees enabling him to make significant contributions to the fields of medicine, law, and science.  His career includes 25 years at Merck & Company and 14 years at Case Western Reserve University’s School of Medicine.

Paul received his BS in Biology/Chemistry in 1965 from Purdue.  He went on to receive his doctoral degree in cellular physiology from Kent State University before joining the faculty of Case Western Reserve University.  His innovative research has been funded by federal, industry and non-profit organizations.

While working on CWRU’s faculty, he received his medical degree in 1988.  Paul’s accomplishments in academic medicine include publishing 125 scientific papers, book chapters, letters to the editor and abstracts.  Paul received a highly sought after National Institutes of Health (NIH) training grant and has been funded on two NIH extramural grants.  He has also served on the NIH scientific review panel.   Brother Kuhnert was promoted to Associate Professor before leaving CWRU to join Merck & Company.

While at Merck, Paul held the position of Senior Director, Medical Affairs whose responsibilities included the medical and legal review of pharmaceutical advertising, writing or editing regulatory documents, and the development of pharmaceutical product circulars.  Brother Kuhnert was involved in 22 drug development programs and received three Merck Award for Excellence commendations.

Paul has made an effort to give back in many ways.  He is a frequent contributor to many charitable organizations and is an active participant in community organizations including the Cleveland Clinic Foundation, the Glassy Chapel Committee and as a member of the Board of Directors of Sandpiper Run. 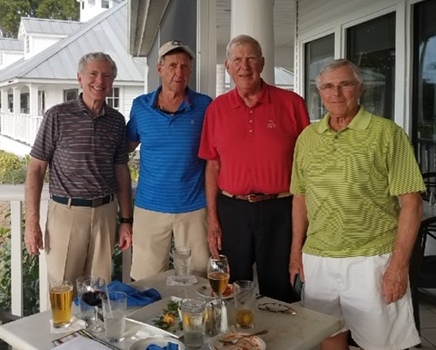 Pledge Brothers Sum It Up Well

Jeffrey Masnick ’65 commented “I am proud to have such an outstanding person as a comrade and fraternity brother.  I admire the leadership and integrity Paul brings to every situation. His accomplishments have been extraordinary, and he has always been a strong supporter of Sigma Chi since our college days at Purdue. “

Another pledge brother Robert T. Smith ’65 stated, “Paul and I became Delta Delta pledge brothers and friends over 50 years ago.  He has made ours an enduring friendship for which I will always be grateful.  Brother Kuhnert has always demonstrated exemplary character, highest integrity and the ideals and virtues that make him a special Sigma Chi.”

Paul has been married to Dr. Betty for the past 51 years.  They worked together in graduate school and later at the Case Western Reserve University School of Medicine.  When Paul took a job with Merck in North Wales, PA, Betty continued her career at Wyeth (later Pfizer).  They have two daughters who live in Georgia and New York and three grandchildren.

Paul and Betty retired in Landrum, SC, at the Cliffs of Glassy between Greenville, SC, and Asheville, NC.  They devote part of their time to taking courses at Furman University; Betty studies languages primarily, and Paul explores writing and photography.  They also play as much golf as they can and volunteer on several boards and committees.

Congratulations Paul, the hierarchy of most beloved Sig Brothers begins your pledge brothers at the pinnacle. Followed closely by those with whom we shared brotherhood at Delta Delta during the years we together were on campus.
It was a special treat when you, Bob, and Dick. joined three ’63 PBs and Brother Ron Karns 64 at February gathering at Siesta Key a couple of years ago. Bob later returned by mail an “ID card” which I loaned him for Spring Break during one of those years together in the house.
Your dedication to medicine and the profession together with your significant achievements bring Honor to Sigma Chi as well as Delta Delta.
Snap! Snap! and Congratulations, Nick

My best wishes to Brother Paul. My greatest memories are that his intelligence was only a part of his great personality and his congeniality for all of us. The award could not go to a more deserving Brother.
Congratulations!!
Russ