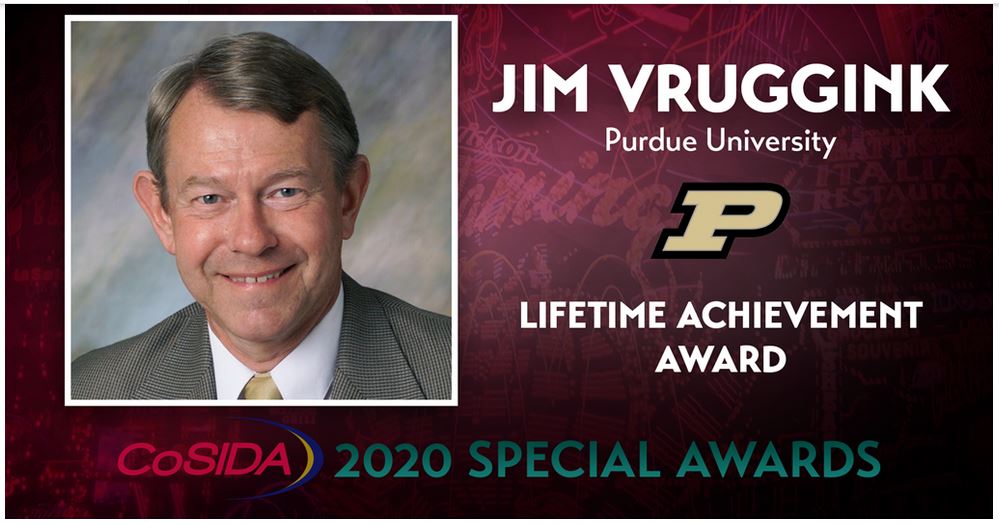 Long time Delta Delta Faculty Advisor, Jim Vruggink, has been recognized for his career contributions to intercollegiate sports with the 2020 CoSIDA Lifetime Achievement Award.  Jim was inducted into the CoSIDA (Collegiate Sports Information Directors Association) Hall of Fame in 2004 and served as president of the organization in 1996-97.

Because of the coronavirus pandemic the 2020 CoSIDA Workshop Convention in Las Vegas scheduled for June has been cancelled.  Jim will receive his Lifetime Achievement Award at the 2021 CoSIDA Convention in Orlando next summer.

Jim stated, “It truly was a labor of love. Not everyone can say they woke up every morning and couldn’t wait to get to work, but I did.  It was because of the people. Hundreds, maybe thousands, of student-athletes, coaches, administrators, colleagues and media members who crisscrossed through my career and impacted me in so many ways.”

Honoring Jim for 37 years at Purdue.

A 37+ Year Career as a Boilermaker

Brother Vruggink came to Purdue in 1982 as sports information director. He was promoted to athletic public relations director in 1986 and then served as director of special projects beginning in 2001 until his retirement in 2019.  In his 37 year career at Purdue, topping his list of accomplishments was working with two-time Heisman Trophy finalist and future NFL Hall of Fame quarterback and Significant Sig Drew Brees ‘01. Jim and Drew maintain a close friendship to this day.

Before becoming a Boilermaker, Jim was the sports information director at Northwestern (1978-82), was an assistant SID at Michigan (1974-78) and sports editor of the Ypsilanti Press (1972-74).

In retirement, Jim remains active serving as the executive director of the National Football Foundation’s Joe Tiller Chapter. Since its formation in 2004, the non-profit organization has recognized the accomplishments of student-athletes, coaches and community members throughout Northwest Indiana while promoting players and coaches for the College Football Hall of Fame and the Indiana Football Hall of Fame. 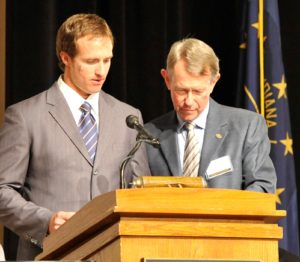 Brother Vruggink remarked, “My greatest sense of purpose and satisfaction came from working as a mentor and advisor for hundreds of Purdue students and interns and in the three different organizations for which I was an advisor – Sigma Chi Fraternity, Purdue Gold Standard and Gimlet Leadership Honorary.”

Jim continued, “I very much enjoyed my interaction with many Delta Delta Sigs who were athletes, student assistants and members of Gimlet Leadership Honorary and Purdue Gold Standard. I also enjoyed being invited to Initiations, Brotherhood Dinners and a few Rush Functions, attending as many as my schedule would allow. For my last 13 years at Purdue, I had the honor of being the Faculty Advisor for Delta Delta and enjoyed the challenges that accompanied that position, while developing many friendships and benefitting greatly from a true sense of brotherhood.”

“I take great pride and have deep appreciation for the two Grand Consul’s Citations (1978 and 2019) now on display in my den at home. I wouldn’t trade my Sigma Chi experiences for anything!”

I think we’d all say the “bond is reciprocal” and Jim has made a career of giving back to the Fraternity and the many undergraduate Sigs whose lives he has touched.  “Thanks Brother Vruggink for all you’ve done for us.”

For more on Jim’s Sigma Chi Journey and his run in with Michigan’s famed football coach Bo Schembechler go to EX Journey.