The Sig House circa 1962 with a smaller version of our Silent Sentinel standing on the SE corner of the house.

A very old black oak tree that has resided on the SE corner of the chapter house and may have been present at the ground breaking for the construction of the chapter house in 1911 has fallen.  Our giant sentinel fought the good fight but due to internal rot it became necessary to cut the tree down for safety reasons.

Oh The Stories It Could Tell

Oh the stories this watchdog of the decades could tell.  From its vantage point overlooking the front of the house down to River Road it has had a bird’s eye view of countless gatherings and events. These included Fly Away and Reggae parties; Homecomings and home football game fire ups in the ‘70’s and ‘80’s; Bowling on the Green in the early ‘60’s; the flames through the Game Room windows at the time of the Great Hall Fire; and Slip-n-Slides during Grand Prix week for over 50 years.

It recalls how each morning and evening pledges would raise and take down the American and Sigma Chi flags from the flagpole at the base of the stone steps; and how they probed the ground around its roots in search of the Chapter Room. 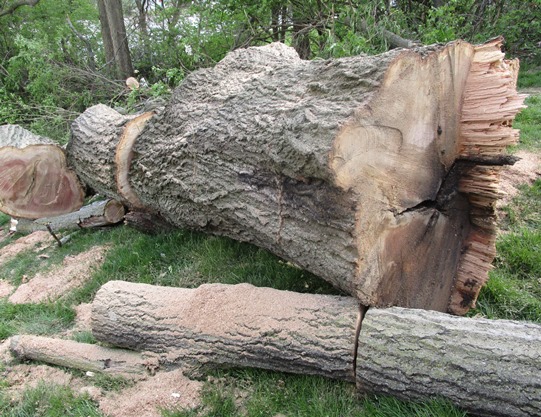 The large tree on the SE corner of the chapter house was cut down for safety reasons.

It remembers the Great Piano Drop, brothers repelling from Room 16 down the side of the house, and Sigs getting some sun on the JD Beach.  It recalls brothers hitting golf balls and shooting bottle rockets from the top of the Junior Dorm; and the glow of the lights and sounds of the Grand Prix team working late into the night on our cart in the Card Room off the Library.  It even caught a glimpse of a daring brother or two taking part in Beta Nu and sprinting down the hill wearing nothing but a smile.

Its seen cars driven down the hill, brothers stumbling up the hill, and large gatherings for photos for historic reunions.  But most of all it has seen generations of young Sigma Chi’s and returning alumni taking in the stately view from the patio and reflecting on their experiences and friendships from their time at Delta Delta.

Oh to be that tree and the memories it could share of the good ol’ days and the days of not so long ago.  To be a silent participant in the history of Sigma Chi’s most historic and cherished residence, and the lives of the brothers who have called it home.