Recognized for Commitment and Compassion

Nate was recognized for his commitment and compassion he has shown to Delta Delta.  In his nomination by the chapter it stated, “In times of hardship, Nate is quick to reach out to the undergrads and make sure that we have support.  When one of our brothers who had just graduated passed away last semester, Nate reached out immediately to our chapter and made sure that everyone was doing well.  Nate showed up the next day at the house just to check on the brothers, provide support and worked with both IFC and Sigma Chi headquarters to make sure that we had the support that we needed during that time.”

Nate further noted, “When I found out about this tragedy, my response was to help the active chapter with their grief and make myself available as they mourned the loss of their fellow brother.  Having never encountered a situation like this, the best way I felt I could offer help was to show up.  I was able to coordinate counseling resources and Greek Intervarsity members to further support the brothers with their grief.”

Nate has taken an active role in interfacing with the undergraduate chapter and officers and has worked well with the other members of the Chapter Advisor team Mike Andreone and Brian Kain communicate with the chapter very effectively.  We all have different temperaments, talents and convictions and are able to use our strengths to support one another as we relate to the chapter. Spreading the responsibility among the three of us, allows us to cover every chapter meeting and other events throughout the academic year.”  The Chapter Advisory Board was implemented by Jay Andrew during his term as Chapter Advisor.

Nate, along with Mike and Brian, continue to work with the active chapter to focus on what’s important and provide the resources and guidance needed to be successful.  The chapter continues to win the Peterson Outstanding Chapter Award for their overall chapter performance. 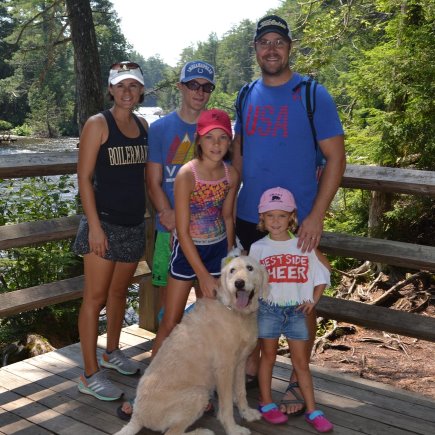 Nate and Meg with their children, Jackson, Addie and Emmy.

Always Something to Work On

When asked what is one of your tougher challenges as an advisor?  Nate responded, “One of the biggest challenges we’ve faced during my time is the transition to a shortened pledgeship, while still maintaining the traditions and rituals that make Delta Delta the extraordinary chapter that it is.  We are also continually challenged with updated policies and procedures to stay compliant with risk management guidelines for hosting social events.  Our advisor team works with the active chapter to help them implement those procedures.”

Thank You and Well Done

House Corporation President Tom Hall ’80 spoke for us all when he stated, “THANK YOU Nate for your commitment and dedication to Delta Delta!!!”  And former House Corp President Bart Burrell ’81 continued, “Outstanding and well done!  Thank you to you and your team. We are fortunate to have men like you step up and give so much to 202.”