Class of ’73 Adds New Luster to the Great Hall

Thanks to the dedicated effort of the Class of 1973 the luster has returned to the Great Hall.  With this class’s financial support and the expertise of Harold Force ’73, new sconce lights have been installed in the Great Hall where the original Vinton lights were once mounted.  These new lights give the room the ambiance that so many of us remember from our days in the chapter house.

New sconce lights on west side of the Great Hall.

The original sconce and chandelier lights in the Great Hall were designed by Henry H. Vinton, 1885, for the chapter house when it was originally built in 1912.  Over time whenever the original fixtures were damaged or broken a great deal of effort was made to restore and repair them.

At the time of the 2007 chapter house renovation the original Vinton lights were unserviceable and unsafe. As part of the renovation duplicate sconces and chandeliers were fabricated. The new fixtures were identical to the original in materials and appearance, but incorporated up-to-date electrical components.

Over the next 10 years the candlestick design sconces were still being damaged during activities held in the Great Hall and when they were removed and reinstalled before and after large social functions. Due to the damage to the fixtures, and the difficulty in getting them repaired, all eight of the sconces were eventually taken down. 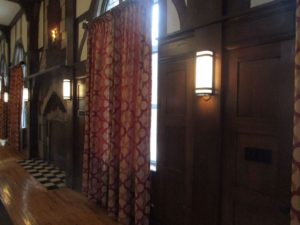 New sconce lights on east side of the Great Hall.

The Class of ’73 Missed Seeing the Light

With the Great Hall lacking the illumination we had come to expect, the Class of ’73 felt that it was important to restore the missing ambiance and character to the Great Hall.

With the guidance of Harold Force, working closely with Butch Brose ‘09, Chapter President David Kratzman ’21, and House Corporation President Tom Hall ’81, a plan came together that would select and install new lights.  Various styles of lights were considered before settling on a design that would compliment the Great Hall and be less prone to damage.  This initiative took place over several months culminating with the new lights being installed in mid-October 2020.

The contributions by the members of the Class of ’73 to cover the cost of the new lights is made in honor of three of their pledge-classmates who are Chapter Eternal.  These brothers are James Parkinson Loop; Richard Powell Kuntz; and Stephen Keith Workman. 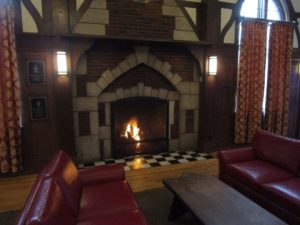 “Lastly,” noted Harold Force, “I cannot express how positively all of my class members supported this project.  We hope that the undergraduate brothers can appreciate how long-lasting our bonds of friendship have been and will continue to be.  That is why it means so much to us to have 202 Littleton in top shape and ready at any time to invite our alumni brothers “back home”.  It is the sincere hope of the Class of ’73 that the new fixtures can remain in place at all times, and be “on call”  to illuminate the Great Hall and the spirit and memories of our undergraduate and alumni brothers.”