Ten undergraduate Delta Delta brothers traveled to Brownsville, Texas, during the week of May 15 – 22, as part of a mission trip sponsored by Encuentro Missions and led by Pastor Bob Evans and his wife from the Valparaiso Nazarene Church.

Chance to Serve Others

The brothers had the opportunity to serve the local community and pave the way for hundreds of volunteers to travel to Brownsville later this summer to take part in various mission projects. The Sigs were one of the first groups to return to the mission facilities following a year and a half hiatus due to COVID.

The brothers spent much of their time cleaning up and making repairs and upgrades to the different mission homes and facilities. This included cleanup and demolition, laying flooring, installing trim, dry walling, and any other renovations that were needed. 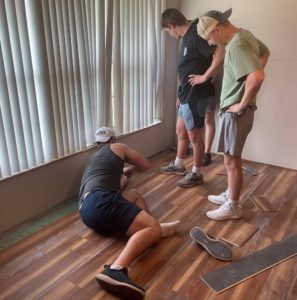 These houses were being renovated for mission families who will be occupying the homes later in the summer when they arrive in Brownsville. In addition to the work that they did in the mission houses, the Sigs spent afternoons putting together care packages for families who were legally entering the United States from Mexico. The brothers were able to distribute 200 Spanish Bibles along with the care packages to families relocating to the U.S.

Senior David Kratzman, who organized the Sigs, remarked, “Brownsville was quieter than I expected.  We did not observe a lot of activity on the bridge from Mexico into the U.S., although we did see immigration patrols quite often. It was a little surreal seeing the 20-foot wall running along the border.”

Additionally, the Sigs had some time to explore the local area including a visit to Boca Chica, Texas, where Elon Musk is constructing his Star base community and launching the Starship rockets. The brothers also spent an afternoon at the beach in South Padre at the end of the week to enjoy the hot sun and refreshing ocean.

“We are extremely thankful for the alumni who sponsored brothers on the trip and supported our cause,” remarked Brother Kratzman. “We had a great experience, learned a lot about each other, and acquired some hands-on skills that several of us had no experience doing previously. It is a very rewarding feeling to volunteer a week of our summer to serve, and the chapter hopes to continue mission trips like this in the summers to come!”

One Response to “Mission Trip to Texas Very Rewarding”

David and the Mission Team

Thank you so much for your note and the work that you and your team did in Texas. Jacque and I have led a mission trip to Piura, Peru for the last 13 years. We take 50 high school kids down to support the work of our friend Fr. Joe Uhen and have built some 200 homes, a school and have supported the orphanage, women’s shelter and hospice there…..so your mission trip hit a cord with Jacque and I.

Helping others is the path to a better world and to happiness. Organizing a trip while still in college to serve is just incredible and lays the foundation for your life journey of servant leadership. I have no doubt you will make an impact on this world.

Thank you for your work and please let us know how we can support your efforts in the future.

In hoc my brother,