A large contingent of Delta Delta brothers returned for the 30th Annual Alumni Golf Outing after a one year break due to the COVID pandemic. It was a great day for golf and sharing old and new memories.

After a one year hiatus due to the COVID pandemic, the 30th Annual Alumni Golf Outing took place on June 19th, 2021, at Purdue’s Ackerman-Allen golf course.  It was a grand return as 78 golfers took part and 90 brothers attended the dinner at the Sig house following the completion of the golf. Alumni golf outing organizer Brian Griffith ’95 stated, “The 30th annual golf outing was a big success.  We had a great turn out for golf, but more impressive was the turnout for dinner back at the Sig house. Thanks to all that came back, played, sponsored, and participated this weekend.”

Spirits were high as the foursome’s teed off.  It was a beautiful day and the course was in great shape. You would think this would have led to some great scores.

It did in the case of the winning team from the Class of 2014 of Brent Roman, Declan Vea, Kevin Brown and Zach Waters, (14 under par). The runner up team of Jake Henry ’96, Dave Woodruff ’99 and Michael Montgomery ’14 (13 under) and third place went to Paul Leffler, Frank Speek, Nick Myers and John Hettinga (all Class of 2015) at 12 under par.

The senior champs were Tom Ford, Scott McConnell, Jim Smith and Kirk Raymond from the Class of 1971 at 7 under par.  For the rest of us there was some good, and not so good, shots that led to a range of scores.  Overall everyone had a great day and can’t wait to return next year.

The Class of ’68 reclaimed their title for Best Class Participation with 13 brothers in attendance, and Jeff Early ’77 was tapped as the brother who traveled the furthest from his home in College Station, TX, although the honor probably should have gone to Jake Clark ’16 from Austin, TX.  In total, we had three brothers fly in from Texas including Doug Widell ’68.

Class of ’95 Holds Belated Get Together

The Classes of ’94 and ’95 returned with 18 golfers to celebrate a couple of belated reunions.  Several of the Class of ’95 met for lunch at Harry’s and then played a round of golf.  The Class of ’95, along with some of the ’94 brothers gathered Friday evening at the new 811 restaurant at the Union and had fun serenading the waitress with the “Sweetheart of Sigma Chi”.  Gavin Philipps ’95 remarked, “It was great to see people who had not had a chance to return in several years and we all picked up right where we left off.” 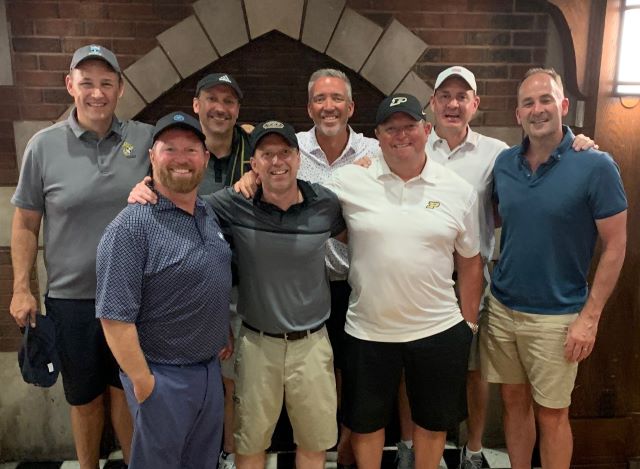 Dinner for 90 at Delta Delta

With 90 alumni at dinner Saturday evening Brian Griffith ’95 was thanked for all his hard work in organizing this year’s outing.  Brian in turn took the opportunity to recognize his pledge brother, Guenter Haines ’95, for his help in putting on the event.  Others who lent a hand were Tom Hall ’81 and Phil Steele ’77.  Special thanks was extended to Butch Brose ’09 for getting the chapter house ready for our return. Brian also wanted to extend a special thank you to all those brothers who sponsored a hole to honor their class or a pledge brother.

It’s hard to capture in words just how much all the brothers enjoyed their return to Delta Delta and Purdue for our golf outing.  After being gone for almost two years, it was evident that the brothers were grateful and very happy to be back together again.  The gift of true and lasting friendships is something we should all take advantage of by making every effort to get together whenever we can.

We look forward to an even bigger group of Sigs at next year’s 31st Annual Alumni Golf Outing.

Always great to see all you “old” brothers able to get together at 202.
Russ