A true friend unbosoms freely, advises justly, assists readily, adventures boldly, takes all patiently, defends courageously, and continues a friend unchangeable. Death cannot kill what never dies, nor can spirits ever be divided that love and live in friendship; this is the comfort of friends, that though they may be said to die, yet their friendship and society are in the best sense ever present, immortal. 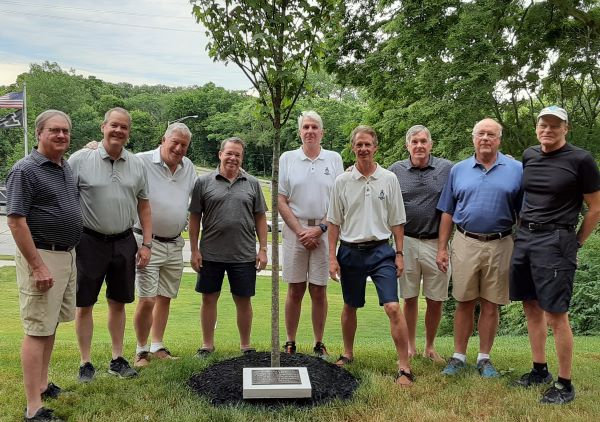 At this year’s Delta Delta Alumni Golf outing, nine members of the Class of ’77 were present to dedicate the Class of ’77 Chapter Eternal Memorial tree. This living memorial was planted on the southeast corner of the chapter house and looks out upon River Road.

Last October the Class of ’77 held a Zoom call in which 15 brothers took part. It allowed everyone to hear about the lives of those on the call, and stories of days gone by. One of the comments made was that their class had been very fortunate to have not lost any of their 27 pledge brothers as they all passed their 65th birthdays. Two brothers on that call were Joel Draper and Dave Hughes.

It was with great sadness and surprise that both of these brothers succumbed to cancer over the next five months, with Brother Draper passing away in January and Brother Hughes in May. The suddenness of these brother’s passing shocked those in the class and led them to fund the planting of the memorial tree in their honor.

Reflections on Our Brotherhood

Joel Draper’s memorial service was held in January and due to COVID restrictions only three members of the Class of ’77 could attend.  The service was a very fitting tribute to a man who loved God, his family, and his many friends.

In May when the service was held for David Hughes, 16 (fully vaccinated) Sigs from the Classes of 1976, 1977 and 1978 were in attendance.  As they met in Denver they were able to reflect on what true brotherhood meant to each of them. As they had seen with their own pledge class, life is fleeting and that the opportunities to gather and share the company of old friends are not to be missed.

Joel and Dave will be missed by those who loved them including their pledge brothers.  The wish of the Class of ’77 is that their memorial tree grows strong and reminds every Delta Delta brother that the greatest benefit of our Fraternity is the gift of lifelong friendships.

Bidding you God speed my brothers, we greet you forever in the sacred bonds of Sigma Chi.

One Response to “Class of ’77 Dedicates Chapter Eternal Memorial”

Thank you all for such a beautiful tribute. You are amazing men and Dave and I were lucky to have known you all.