“Service to Delta Delta of Sigma Chi comes as naturally as taking a deep breath the first time that you walk through the balcony entrance and gaze down into the Great Hall.  It just appears that great things must go on here, and indeed they do.”  Harold Force ’73 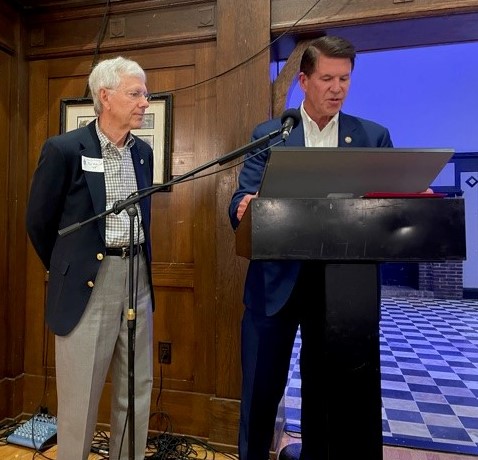 Delta Delta has experienced many outstanding moments over the years.  The Alumni Honors Dinner held on October 1, 2021, in the Great Hall was one more of these celebrated events.  Five Significant Sigs and one Order of Constantine brother were presented their awards in a formal event hosting over 115 alumni, guests and undergraduates.

Significant Sig honoree Tom Canfield ’66 remarked, “This was a great evening.  I think the event gained from the number of honorees. It was impressive to see the span of time that Delta Delta has had so many outstanding brothers. I was really impressed to see the support from more than one pledge class for Brother Scott Hutton.”

All the guests gathered prior to the dinner for a Social Hour served in the Game Room and on the outside porch overlooking the front lawn.  After finding their seats the evening began with welcoming remarks from Consul Sam Spears ’22 and Phil Steele ’77 on behalf of the chapter and House Corporation.  Consul Spears led the guests in the Sigma Chi Grace and the evening was officially under way. The dinner was catered by The Outpost and served by several of the active Sigs.

64th Grand Consul Keith Krach ’79 Opens the Ceremonies
Former Undersecretary of State, business entrepreneur, and 64th Grand Consul Keith Krach ’79 set the stage with his opening remarks upon the completion of dinner.  Brother Krach reminded all those present of the ideals instilled by Sigma Chi as undergraduates and the importance of trust in all aspects of our lives. 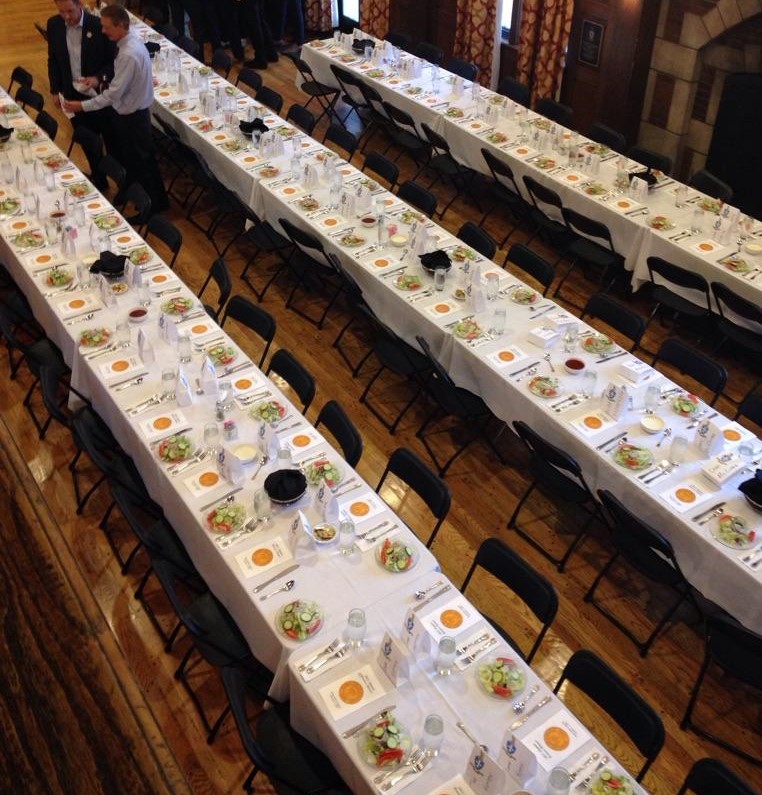 Dinner is served in the Great Hall

Significant Sigs Recognized
Each of the five new Significant Sigs were then individually presented their plaques, certificates and pins by former Grand Consul Keith Krach after having their accomplishments read by Phil Steele.  Those honored were Paul Kuhnert ’65, Tom Canfield ’66, Tom Morales ’75, John Taylor ’75 and Scott Hutton ’94. Delta Delta has had 61 alumni selected as Significant Sigs. The most of any Sigma Chi chapter in the country.

The audience then had the wonderful opportunity to hear from one of the honoree’s pledge brothers who represented their class.  From these remarks one was able to see and feel the impact these brothers had on their pledge class, their families, peers and community.  The stories brought smiles and heart felt emotions to everyone present.  We’d like to thank Tom Newell ’65, Steve Young ’66, Pat Loehrer ’75, John Buckingham ’75 and Gavin Philipps ’95 for sharing their insights with us. 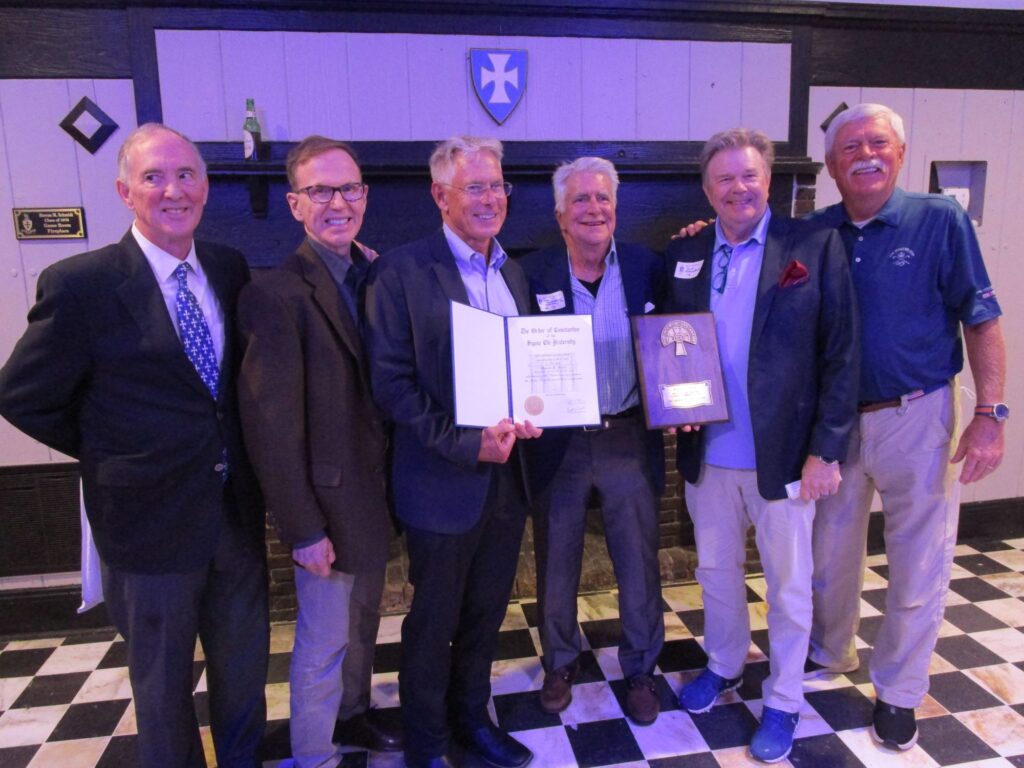 Each of the Significant Sig honorees then spoke to the large crowd about their own personal journeys. The highs, and some lows, but most of all about the impact and the support they had received from their pledge brothers and other Sigs throughout their careers.

Gavin Philipps ’95 noted, “The brothers in our class who got the chance to hear our Significant Sigs speak spent a lot of time Saturday talking about how we can “pay it forward even more” like our brothers talked about on Friday night.”

Order of Constantine
Harold Force ’73 was presented Sigma Chi’s highest honor, the Order of Constantine, although not quite the way he had planned it.  All set to host 16 family members and 20 pledge brothers and their wives to the Honors Dinner, Harold was sidelined when he contracted a breakthrough case of COVID.  Although not able to attend in person, Harold was feeling well enough to participate through a video link with his son, Clayton Force ’02, standing in for him.  His pledge brother’s remarks entertained the crowd and Harold’s own thoughts at the end of the presentation captured the true spirit of the evening and the lifelong commitment our Fraternity and chapter inspires.  Harold is the 10th Delta Delta brother to receive the Order of Constantine.

A Song to Get Us Out of Here
No Sigma Chi formal event would be complete without a song or two.  To show our appreciation for all the wives and daughters in the room, who each received a white rose, Bill Canfield ’61 led the brothers in a respectable version of “The Sweetheart of Sigma Chi.”  And then just has he had done 60 years ago as his pledge class’s song leader, Brother Canfield led us in a rollicking chorus of “My Name is Sigma Chi, Sir” to end the evening.

Geoff Ley ’96 commented, “It was great to see everyone this past weekend for Homecoming and the dinner honoring our latest Significant Sig additions.  My children were impressed with the house, and my wife was even more impressed with the event on Friday evening.  Thank you continuing to host events that bring our alumni back to 202 Littleton and remind us of how special it is.” 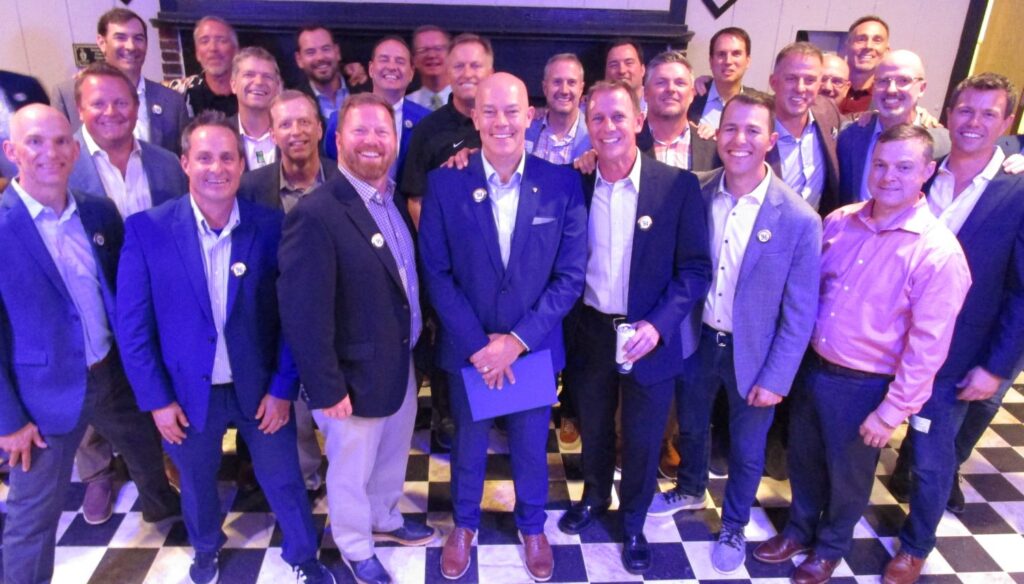 Brothers from the Classes of ’92 through ’97 celebrate Scott Hutton ’94’s (center) achievements.

One Response to “Brothers Honored at Special Chapter House Event”

Always glad to hear successes among our Brothers, especially those I knew as an undergrad at Delta Delta nearly 60 years ago!! Those from my era that were honored certainly deserve their honors.
Russ