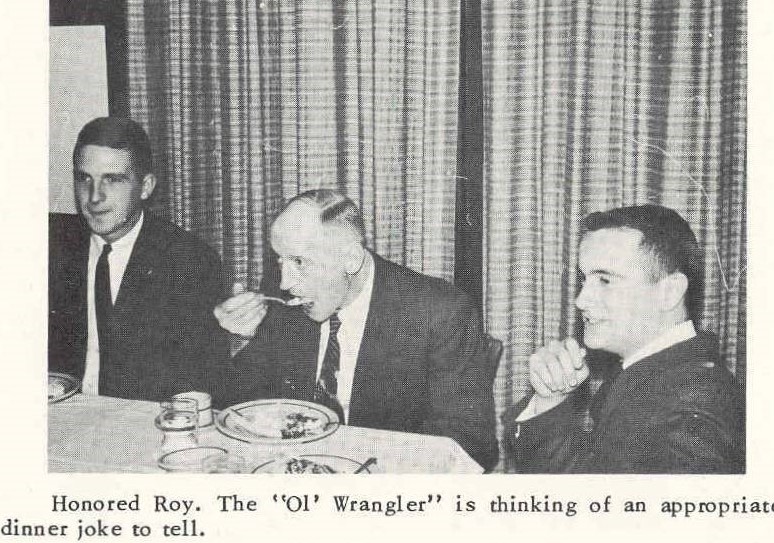 In the photo to the right, Bob Schneider ’61 is shown on the far right. Bob recalls, “that Consul Dave Howe ’61 (on the left) and me (then Pro Consul) are seated with Roy at the head table in the house dining room. I don’t recall the occasion -it may have been Roy’s birthday or simply a chance for the brothers to say thanks to him for his many years of work on our behalf. It must have been taken in the Spring of 1961. Roy was simply an indispensable part of the Delta Delta culture. He went about his work and did not bother us unless we got in his way. He knew all the brothers and we respected him. I never saw him come or go but he was there except when he took his afternoon nap in one of the recesses behind the walls. Good people like Roy deserve to be remembered.”

Bernie Sergesketter ’58 remarked, “By the time I pledged in 1954 Roy Slavens had been the 202 “Houseman” for many years. I’m not sure where he lived, but he spent his time at the house when he wasn’t doing work in a room underneath the kitchen.  Roy cleaned each of our study rooms, and he changed our sheets and took care of getting them laundered.   The pledges did the cleaning of the common spaces, and all of the actives and pledges were careful not to leave a mess anywhere or Roy would show his displeasure.”

“Roy couldn’t whistle properly,” according to Nick Fritsch ’63, “He sounded more like air slowly leaking out of a tire. Undaunted, on his happy days, he would shuffle down the hallway dragging his box (an empty 50 roll box of toilet paper) with a clothesline rope. That was his trash “cart” for emptying waste baskets and beverage containers. He was kind with an occasional display of gruffness. “ 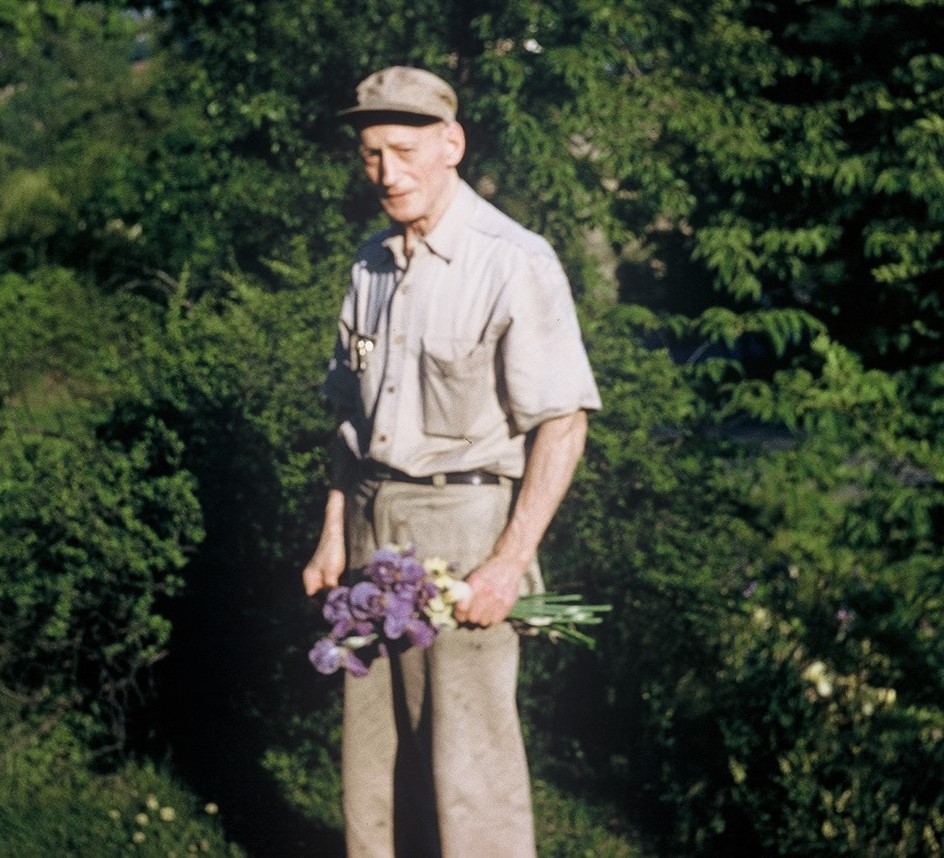 Jim Lopeman ’63 commented, “In the main, my personal relationship was in keeping with the general perception that he was “a friend to pledges.”  However, on one occasion, I was crawling into a “nook” accessible through a quarter-height door behind a desk in Room 15, where I hoped to nap undetected while cutting Math class. To my surprise, I encountered the Ol’ Wrangler, who let me know, in no uncertain terms, that this was his spot and I should get the hell out and find my own place.”

Roy Edward Slavens was born the day after Christmas, December 26, 1893, in Romney, Indiana. From documentation uncovered by Jim Lopeman ’63, in 1936, Roy lived in Lafayette and worked as a timekeeper at Ross Gear.  He was single and was rejected by the Navy due to heart trouble.

The death certificate says he died of a cerebral hemorrhage, at St. Elizabeth’s Hospital, on March 30, 1969 at the age of 75.  Among the facts reported by his sister, Martha Thomas of Indianapolis, is an indication he was divorced.  The certificate says he was buried at Rest Haven Memorial Park in Lafayette.

“I sure remember Roy,” reflected Robert Hamilton ‘58, “and I regret that I never learned more about him.  He was such a fixture around the house, we kind of took him for granted.  As I remember him, he was always very quiet, pleasant, and helpful.”

A Tip of the Hat

“Jim Dora and I noticed that the house didn’t look as well cared for after Roy retired and was not replaced,” stated Bernie Sergesketter ’58, “So we lobbied hard for what turned out to be the terrific decision to hire Butch Brose ’09 as the chapter’s maintenance director at the completion of the chapter house renovation project.”  An appropriate “tip of the hat” to Roy Slavens for his many years of dedicated service to Delta Delta. 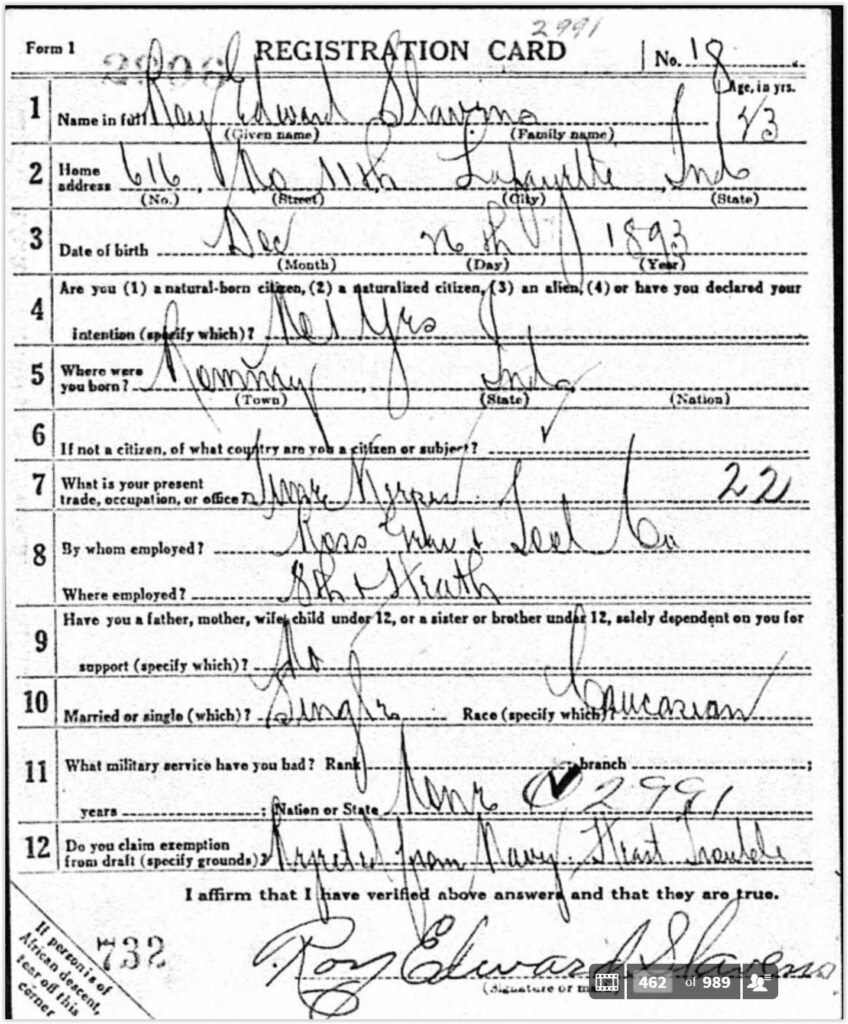 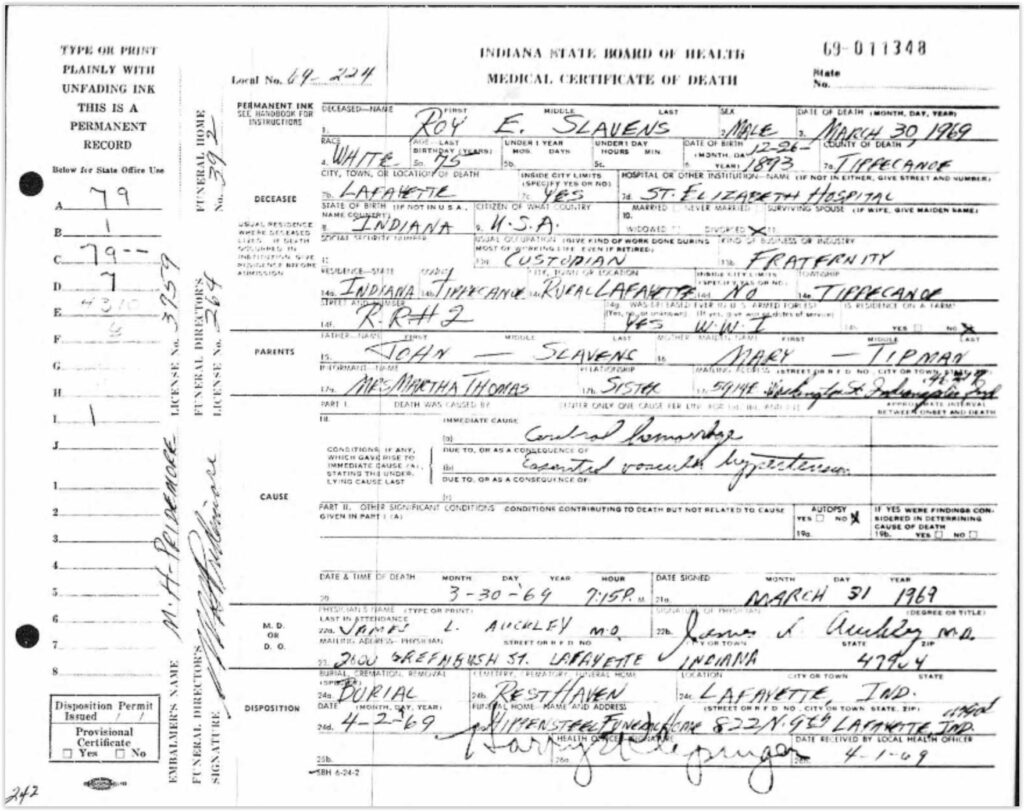