As Delta Delta pledges we learn a great deal about the early contributions to our chapter of brothers like George Ade, John T. McCutcheon, Bennett Taylor, Clarence Bivens, and Booth Tarkington.  But often overlooked and seldom acknowledged are the contributions of Delta Delta Sig Frederick Scheuch, 1893.

For his lifetime commitment and service to Sigma Chi Frederick Scheuch was one of the first Sigs inducted into the Order of Constantine in 1948, and Delta Delta’s first member to receive Sigma Chi’s highest honor. Considered the “Father of Sigma Chi in the West” Scheuch established undergraduate chapters in five western states in the early 1900s. Frederick established the undergraduate chapters at the University of Montana and Montana State. He also guided the establishment of additional chapters in the states of Wyoming, Idaho, Utah and Washington.

Before going west to Montana, he was Grand Praetor of the then-fourth Province in Indiana and later in Montana he served as the Grand Praetor of 17th Province. In August 1939 during the 44th Grand Chapter in Los Angeles, the Sigma Chi membership chose Scheuch to serve as 30th Grand Consul.

Frederick was born in March 29, 1871 in Lafayette, Indiana. He grew up in Spain where his father served as a U.S. Consulate. Frederick returned to the United States to attend Purdue. When he started at Purdue, he could barely speak English and employed a translator until his skill of the language improved.  He received his B.M.E. in 1893 and A.C. in 1894.

30th Grand Consul, Frederick C. Scheuch, turns over the role of Grand Consul to William B. Ricks at 45th Grand Chapter in 1941.

Scheuch served as Purdue’s undergraduate delegate to the Grand Chapter in Indianapolis where in 1892 he was also appointed Kustos of his local chapter. At that time, the structure of the Fraternity was different, and such appointments were made at Grand Chapter. Throughout Scheuch’s lifetime, he attended 12 Grand Chapters.

In 1895 Brother Scheuch arrived in Missoula, MT to teach French, German and Spanish at the University of Montana. During his career in Montana, Frederick served as interim university president on five separate occasions. When asked to assume the position permanently, he refused saying it would take him away from his daily contact with his students.

Upon his arrival in the University of Montana, Scheuch served as the Grand Praetor of what was then called the 17th Province. According to Scheuch there were only four Sigma Chis living in Montana- all of them on the staff of the university. There were no undergraduate chapters at  the University of Montana. The nearest undergraduate chapters were 1200 miles to the west at Washington and 700 miles to the east at Minnesota.

By the time Scheuch retired sometime in the 1930’s he had actively worked on the establishment of the undergraduate chapters at the University of Montana and Montana State, and helped guide the formation of Sig chapters in the states of Wyoming, Idaho, Utah and Washington. After the establishment of the chapter at the University of Montana, Scheuch spent most of his free time in the chapter house. He often held court with students in the kitchen and offered a cup of coffee and advice to all who sought his counsel. 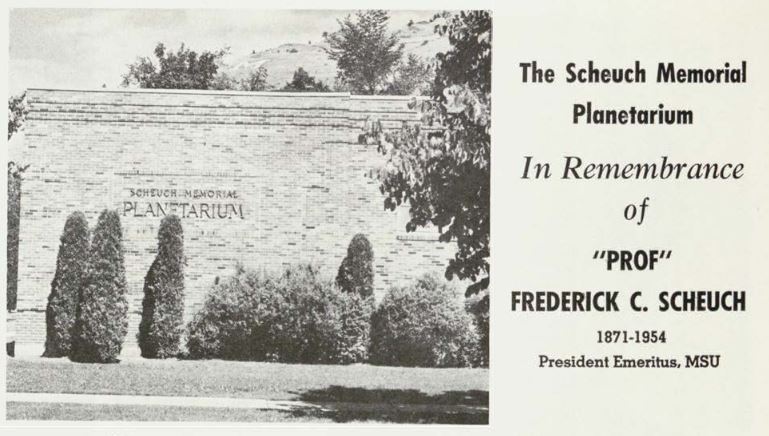 The Scheuch Memorial Planetarium on the campus of the University of Montana, Missoula.

Brother Scheuch entered Chapter Eternal on January 17, 1954, in Los Angeles, CA after a long illness. In the Fall of 1954, the dedication of the Scheuch Memorial Planetarium took place on the campus of Montana State University, which is now the University of Montana, Missoula.

Information provided by The Magazine of Sigma Chi – Spring 2008