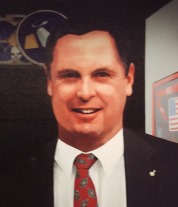 Greg Harbaugh ’78 made significant contributions during his 10 year tenure as the President and CEO of the Sigma Chi Foundation where he expanded and added new undergraduate programming.

Under Brother Harbaugh’s direction Foundation scholarships increased ten-fold from $50,000/year to about $500,000/year; programs funded by the Foundation expanded from a limited Balfour Leadership Training Workshop (BLTW) and two weeks of Horizons, to five weeks of Horizons (fully funded for the next ten years), a reconstituted BLTW that nearly doubled in size, as well as the addition of programs to address alcohol and drug use/abuse, depression and suicide, hazing, and sexual misconduct/rape. The Foundation’s financial reserves increased six-fold, from $2.5M in the bank to almost $15M, thus positioning the Foundation and Fraternity for a sustainable future.

Greg was also recognized in 1991 as a Significant Sig for his contributions to America’s space program.