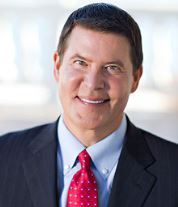 Keith Krach has been an ongoing significant influence in the General Fraternity and Delta Delta since his graduation in 1979. Keith was selected as the International Balfour Award winner in 1979; he then led the Sigma Chi’s Balfour Leadership Training Workshop for over 20 years.  He was instrumental in the creation of the Horizon’s Leadership program.

Keith served as Sigma Chi’s 64th Grand Consul and continues to leave his mark on the Fraternity’s leadership programs through his contributions to the Krach Transformational Leadership Workshop.  Brother Krach has been recognized as a Significant Sig; inducted into the Sigma Chi Hall of Fame and Founder’s Circle.  The Delta Delta Chapter House also bears his and George Ade’s names.