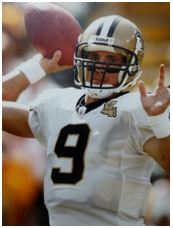 In recognition of your 20-year NFL career with the New Orleans Saints and San Diego Chargers where you became the NFL leader in career completion percentage, and second in career passing yards, career touchdown passes, career pass attempts, and career pass completions.  You led the Saints to three NFC Championship Game appearances, and to the Super Bowl XLIV title earning the game’s MVP award. During your career selected to 13 Pro Bowls, named Comeback Player of the Year in 2004, was twice named Offensive Player of the Year, and led the NFL in passing yards a record seven times.

Your illustrious career at Purdue where you led the team to the 2001 Rose Bowl, your recognition as the Maxwell Award winner in 2000, given to the College Football Player of the year; your selection as two-time finalist for the Heisman Trophy; and your numerous Big Ten Conference records in passing yards, touchdown passes, total offensive yards, completion percentage, completions and attempts.