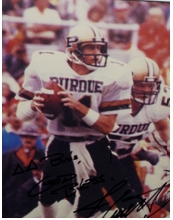 In testament to your outstanding and fast-moving professional football career whereby, in only five seasons, you have become one of the top-ranked quarterbacks and passers in the highly-competitive National Football League. In honor of the many records you have established with the Los Angeles Rams, having achieved the highest number of passes, completions, yardage, and touchdowns, and becoming only the second player in the Rams’ long and star-studded history to have passed for more than 3,000 yards. In recognition of your continued achievements in recent seasons, where you led the Rams to five come-from-behind victories and the playoffs while becoming the second highest rated quarterback in the N.F.C. for the 1989 season, and gaining the highest amount of passing yardage for the 1990 season. In tribute to your good works to help others through the Jim Everett Foundation and other charitable efforts.