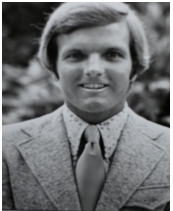 For an outstanding career in professional football. And for a distinguished athletic record while attending Purdue University, including two seasons as a member of the basketball team and two years as an All-America quarterback of the football team. For being named the Most Valuable Player in the Big Ten Conference in 1966. For an exceptional career as the quarterback of the Miami Dolphins including being named All-Pro Quarterback and leading the team to the Super Bowl Championship in 1973.