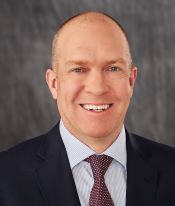 Prior to his leadership roles, he worked in the corporate and securities practice in the Chicago office of Mayer Brown LLP, where he represented the company as legal counsel in a variety of corporate transactions.

Ed is a 1992 graduate of Purdue University and received his Juris Doctor from Saint Louis University School of Law.

Community and Charitable Involvement
In Ed’s leadership positions, he has played a key role in his company’s commitment to giving back to the community.  Ed is also responsible for managing Caesars charitable contributions and aligning them with their strategic initiatives to help organizations that help the aging population, organizations that focus on environmental and social responsibility, and organizations that assist with education, workforce development, and continuing education programs.

Ed has served on the board of directors for the Cancer Support Community in St. Louis, and the board of the Community School, where their mission is to foster the intellectual, emotional, and creative growth of young children.