Robert A. DeMoss ’49, a member of the Purdue Intercollegiate Athletics Hall of Fame and the patriarch of Purdue’s famed Cradle of Quarterbacks, entered Chapter Eternal on July 23 at the age of 90.

Bob, known as Demo to all, initially gained fame as a freshman at Purdue in 1945. He helped the Boilermakers win their first four games and move into the national rankings at No. 9. He then led Purdue to an improbable 35-13 victory over fourth-ranked Ohio State in Columbus before 73,585 fans, the most ever to watch the Boilermakers up to this point. 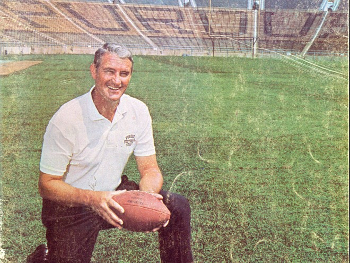 Bob DeMoss ’49 was part of Purdue football and athletics for 42 years.

During Demo’s career he passed for 2,759 yards and 23 touchdowns, a record at the time. He was then selected in the second round of the 1949 NFL Draft by the New York Bulldogs.

After one year in the NFL, Bob returned to Purdue in 1950 where he contributed for the next 42 years as an assistant coach (1950-69), head coach (1970-72) and assistant athletics director (1973-92). Along the way, he recruited and developed many members of Purdue’s Cradle of Quarterbacks: Dale Samuels, Len Dawson, Bob Griese, Mike Phipps and Gary Danielson.

Wrote Bob Collins in his book “Boilermakers: A History of Purdue Football”: “The gangly, timid youngster from Dayton, Kentucky, had completed the cycle … Purdue’s first great quarterback … the developer of All-Americans and right-hand man of Mollenkopf … and, finally, the head coach. Few men have contributed as much, in so many ways, to a school’s football program.”

A Sig for Life

A fixture at Purdue and West Lafayette since 1945, Brother DeMoss was always in attendance at Sigma Chi events and reunions. His affable nature, broad smile and firm grip were always present. He enjoyed the good natured ribbing of his classmates and was proud to be a Sigma Chi. 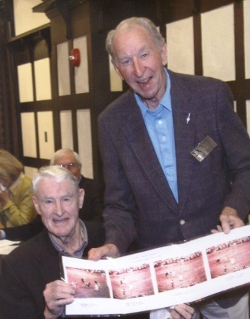 At the Greatest Generation reunion held in 2008 one of Bob’s team mates on the 1947 football team, Ralph Weiger ‘49 decided to settle a 60 year dispute between him and Demo. As Demo recalled his throw to Weiger, who was an end on the team, for a touchdown in the 1947 game against Indiana was right on the numbers and a catch anyone could handle. Ralph’s recollection was that Demo’s throw was not so perfect and he could prove it.

To Demo’s chagrin, Ralph pulled out an enlarged copy of a film strip that he had located in IU’s sports archive from the game in 1947. This film showed frame by frame Demo throwing his pass to an outstretched Weiger catching the ball while falling backward into the end zone. Ralph presented Bob with the enlarged and laminated film clip to help refresh Bob’s memory and set the story straight.

Brother DeMoss will be remembered as a true Boilermaker and Sigma Chi. His genuine kindness and affable nature will be missed. All honor to his name.

To learn more about Brother DeMoss’s career and impact on the Purdue community visit these stories. 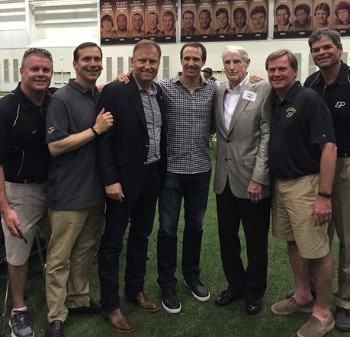