Jay Andrew ’98 was honored at this year’s Brotherhood Dinner with Delta Delta’s highest honor for service to our chapter, the Ben Taylor Award.  This award was created in 2015 to recognize brothers who have contributed significantly to Delta Delta with their time, talents and treasurers.  Jay was recognized for giving unselfishly of his time and talents by serving from 2008 to 2018 as Delta Delta’s chapter advisor. 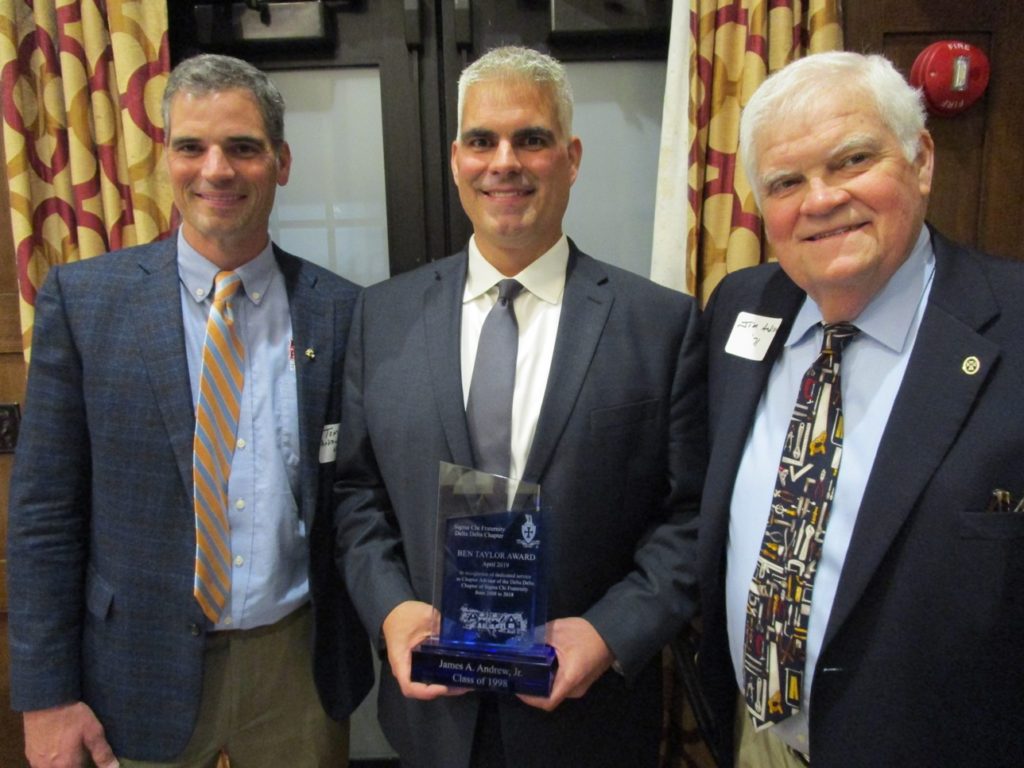 Filling the Role of Mentor

Phil Steele ’77 stated, “As someone who has also lived the life of a Chapter Advisor, I can truly speak of the dedication and commitment shown by Jay in filling the role of mentor to our younger brothers.  The late night calls, the occasional visit to the Dean’s office, and the willingness to attend numerous chapter meetings and events, endeared Jay to his younger brothers.”

Rajiv Samagond, Consul in 2016 wrote, “Jay has been one of the most impactful mentors to all of the brothers here at Delta Delta.  He was continuously able to bridge the gap between various groups – whether it was the undergraduates, alumni, the university, or Sigma Chi nationals.  As opposed to pushing a particular point of view, he was able to convince and inspire the chapter to do what was right. What I appreciated most was being able to come to him with any issue and know I had his support regardless of the situation. Jay’s impact will forever stay with the house and all of us who had the pleasure of working with him!” 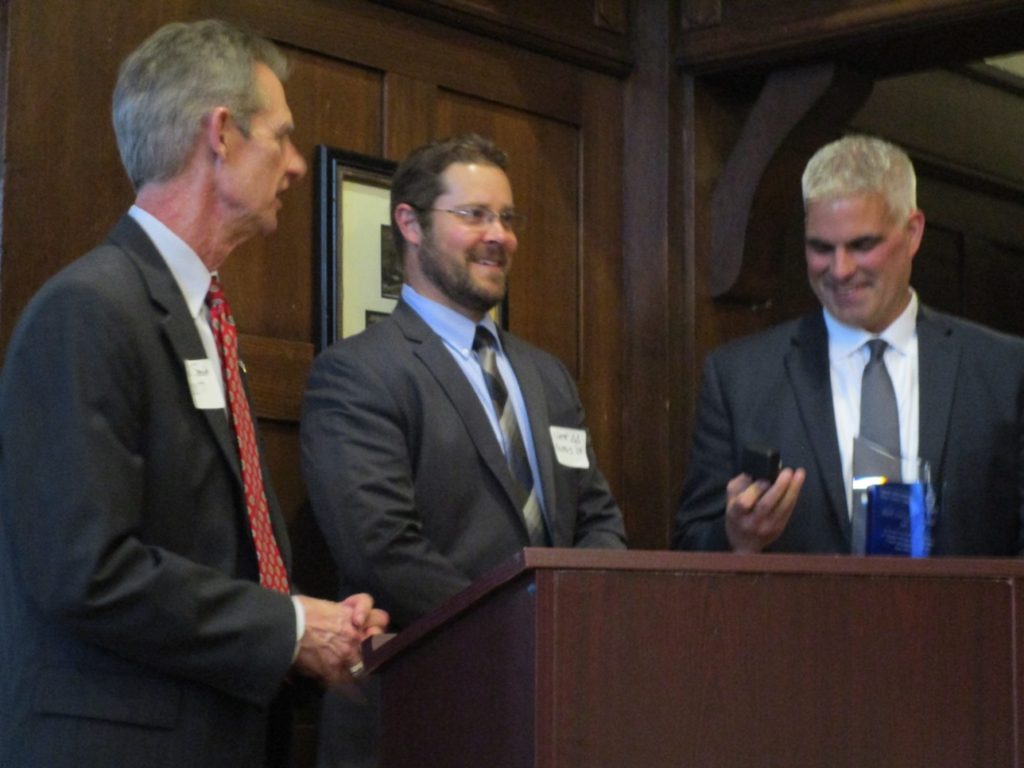 Steele, who, along with Chapter Advisor Nate Gustus ’05, presented the award to Jay further noted, “At one time I heard the average tenure of Chapter Advisor for Sigma Chi was 18 months.  For Jay to serve in this role for 10 years is a tribute to Jay’s love and concern for the young men under his charge.

The secret to being an outstanding Chapter Advisor is knowing how to balance the interests of the undergraduate chapter with those of our alumni, the university, and the community.  Recognizing at all times that as a Chapter Advisor you must lead by example and to encourage our younger brothers to strive ever to conform to that standard of manhood that is noblest and best.”

Jim Andrew ’71 and Tom Andrew ’03 both commented on Jay’s accomplishments.  Jim reflected on the Andrew’s family’s long Sigma Chi legacy going back to 1899.  Jim presented Jay with his EX pin that had been used in several initiations beginning in 1917.  Tom remembers Jay as the older brother who always set the right example …. most of the time.  Former consuls, Greg Burns ’14 and Mark Back ’13 also commented on how well Jay kept things in perspective as he helped the chapter make the right decisions.  Concluding the remarks was Jay’s pledge brother, Steve Boyce ’98, who reflected on how Jay had always shown leadership from his early days at Purdue and how rewarding it was to be part of their pledge class. 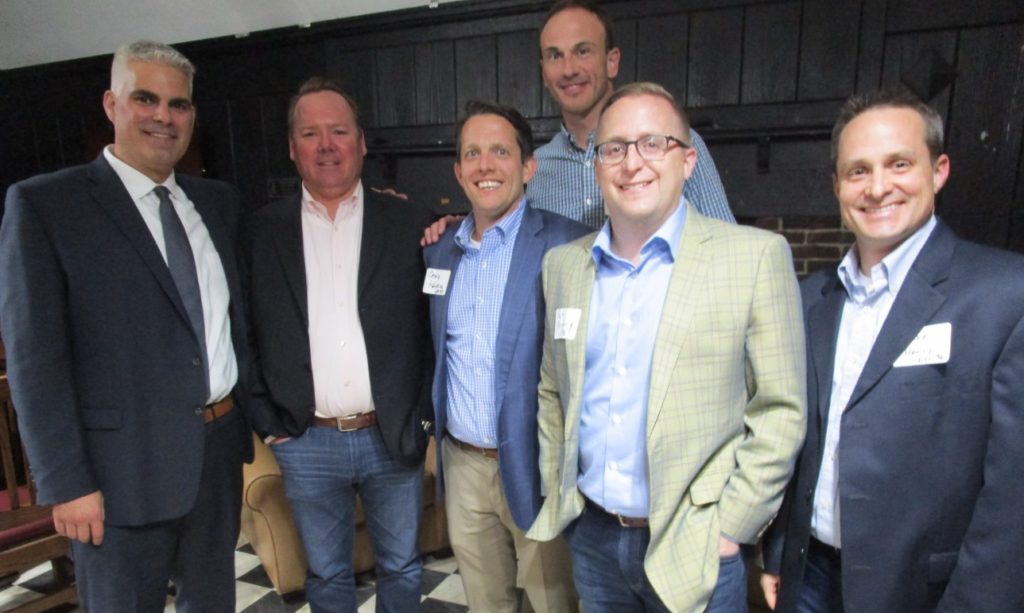 Making an Impact from the Start

Max Long ‘16, Delta Delta’s consul in 2015 wrote, “Jay was our Chapter Advisor for my four years at Delta Delta, but the term doesn’t even begin to describe Jay’s importance and impact on the chapter and its brothers during my time at Purdue. I think Jay’s impact started for most of us at the Alumni Rush Event. For those of you that have never been to that event, Jay gives a heck of speech. I’d go as far as saying he was the reason that many of us joined Delta Delta in the first place.

Jay was a friend, brother and role model for each and every member that came through the house. Whether he was providing advice when we needed it most or telling us stories of his time in the house (most of which couldn’t leave the Chapter Room), he always had a way of putting things in perspective that reminded us what it truly meant to be a Sigma Chi in the first place.  Max concludes, “Jay, I can’t thank you enough for your support over the years.  Our Delta Delta experience would not have been the same without you.”

We are certain that this is the sentiment for all of our young brothers who became Sigma Chi’s under Jay’s watch.