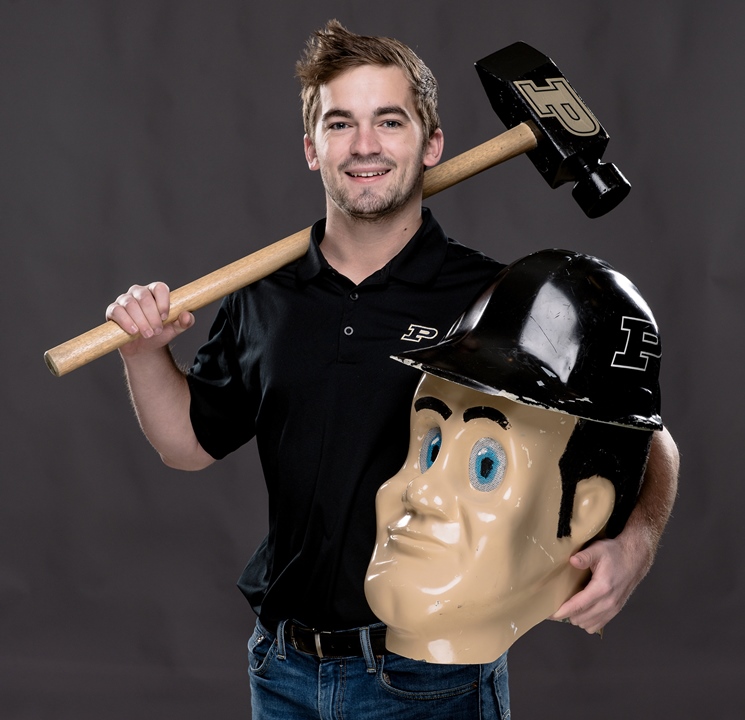 Delta Delta has had an ongoing tradition of supplying at least one Purdue Pete, if not more, for the past 10 years.  Kyle Sheehan ’19 is wrapping up his stint as Purdue Pete with his graduation in May.

Kyle noted, “Being Purdue Pete has been one of the greatest things I’ve ever done. Growing up as a Purdue fan, my parents brought me to countless Purdue football games. I remember seeing Purdue Pete during the tailgates, and the happiness I felt when he stopped to take a picture with me.  During every game or event I attend, I try to emulate what Purdue Pete was to me, so that I can give every kid the joy that this University has brought me.”

Looking for Creativity and Variation

Kyle tried out to be part of the Purdue Pete team as a freshman and was cut early in the tryouts.  When Kyle tried out again as a sophomore he decided that even if he didn’t get selected, it was a fun way to spend a Saturday.  Kyle commented that the tryout process is difficult.  During tryouts each candidate goes through five stations:  strength assessment, doing an impromptu skit, leading “Hail Purdue”, dancing, and reacting to improvised game day scenarios.  “The main thing that is emphasized during the tryout is creativity and variation. We want to see if guys can think on their feet and how they react differently to different situations, because when you are in suit there’s always something that you cannot prepare for,” noted Kyle.

Being one of the six Purdue Pete’s can demand up to 40 hours/week.  Every new member on the team completes at least three hours of study tables/week.  All the Pete’s lift weights three days per week for 1.5-2 hours each, and they hold a weekly hour long meeting with their coach to go over events and game day promotions.  During the busiest seasons, (football/spring) each Pete attends at least 1-2 events per week.  Home football Saturdays are an entire day affair, with tailgates sometimes starting around 7am, and for night games the team of Purdue Pete’s can still be found in the stadium past midnight.  To get a better feel for all the Purdue Pete’s take part in, view this short “Purdue Pete” video. 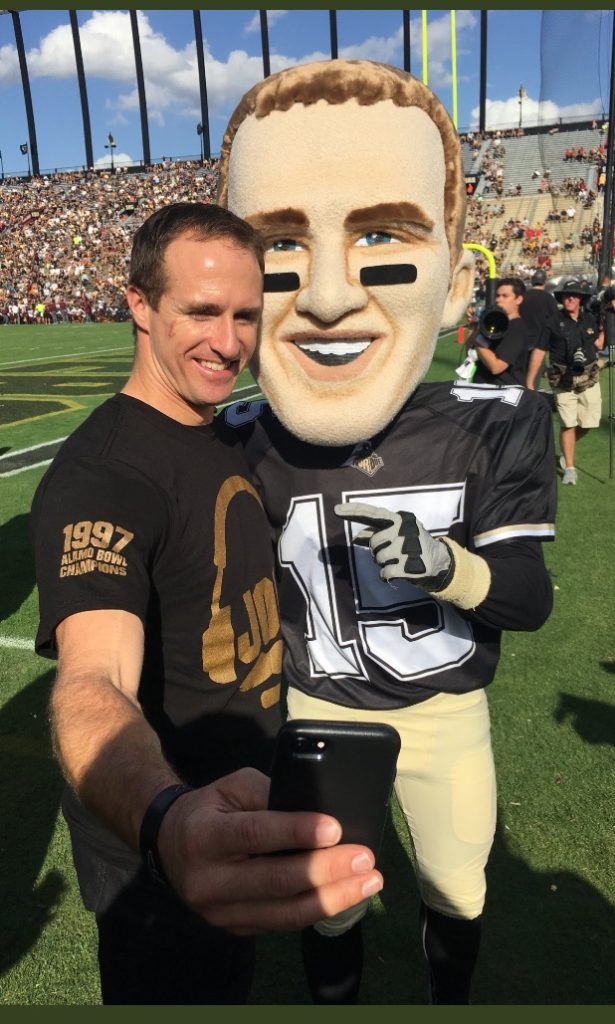 A Selfie with Drew Brees

At every home football game, the Petes don their “Purdue Legends” suits that look like four former Purdue football greats (Drew Brees, Bob Griese, Leroy Keys, Rod Woodson), and race up the field during the intermission following the first quarter.  Kyle Sheehan ’19 always chooses to be Drew Brees.  At the game last fall that honored Joe Tiller and the 2001 Rose Bowl team, Brees returned where he took the opportunity to get a selfie with a fellow Sig who was dressed as Brees’ character.  Kyle remarked, “I thought it was really cool because the roles were reversed and he was the one that wanted a picture with me.”

Since being selected to the team Kyle states, “I’ve had the chance to attend the 2018 NCCA Basketball tournament, the Music City Bowl in Nashville, entertained at a Pacer’s game; and traveled to several away football games.  I’ve even done photo and video shoots for companies including AT&T and Coca-Cola.  But the greatest privilege has been the opportunity to be court/field side for some of the greatest moments in Purdue sports history including beating #2 ranked Ohio State in football; #6 ranked Michigan State in basketball; and taking down IU in convincing fashion in Mackey every time they came to town.”

Carrying on the Tradition

Kyle is graduating in May with a Bachelor of Science degree in Unmanned Aerial Systems with a minor in forensic science and a certificate of entrepreneurship and innovation.  With Kyle graduating the Sigma Chi Purdue Pete tradition will remain strong as junior Joseph Desmond and freshman Luke Peter are current members of the Purdue Pete team.   We want to thank Kyle, Joe and Luke for keeping the Boilermaker spirit going strong from 202 Littleton.  Boiler Up!