Sigs Hoop It Up with Special Olympians 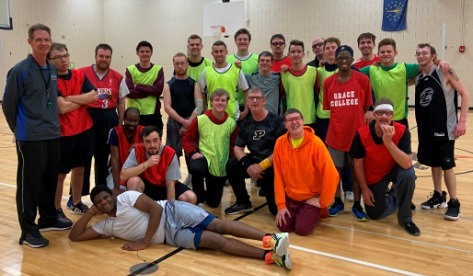 Recently several of the brothers forced themselves to get out of bed early on a Saturday morning to take part in scrimmage games with Tippecanoe County’s Special Olympics basketball teams.  The two Sig teams each played games against two of the four Special Olympics teams. The Sigs have been doing this for the past 4-5 years.

Taking on the “College Kids”

The Special Olympics players really enjoy the opportunity to show the “college kids” how it’s done.  The Sigs do a great job of adjusting their play to the skill level of whatever team they are matched up against. This includes a lower level team, a girls’ team, and a couple of teams that will push the brothers to play hard.  In the end the Special Olympics teams always seem to win.

It was not surprising to learn that a couple of the Sigs have helped out at other similar activities.  David Mudd ’20 has a cousin with Down syndrome and has taken part in Special Olympics events. Graham Haines ’23 has been involved in Best Buddies, a program that matches volunteers with individuals with special needs, who then spend time together doing a variety of activities.

Consul David Kratzman ’21 commented, “Delta Delta has always had a great time partaking in events throughout the community where we can make a positive impact. We are extremely blessed to have such great brothers who are willing to take time out of their busy schedules to spend time with those in the community with disabilities. Although playing basketball may just be another normal thing for us to do, we know that playing with the men and women involved in the Special Olympics is something special, and it’s a great thing that we are able to find common ground in a great game.”

Phil Steele ’77 and Ryan Steele ’09, who are both involved with the Tippecanoe Special Olympics program, would like to thank the brothers on behalf of all the Special Olympians who can’t wait to play them again next year.