This month on Veteran’s Day we recognized all our veterans and active service members for their service. Delta Delta brother Will Bowman ’10 is currently deployed to Bagram Airfield in Afghanistan as part of Operation Freedom Sentinel and Operation Resolute Support.

Will is a Chief Warrant Officer 2 who pilots CH-47F Chinook helicopters as a member of the 4th Combat Aviation Brigade. Since arriving in Afghanistan this past summer Will has flown a number of missions and gained some valuable experience. 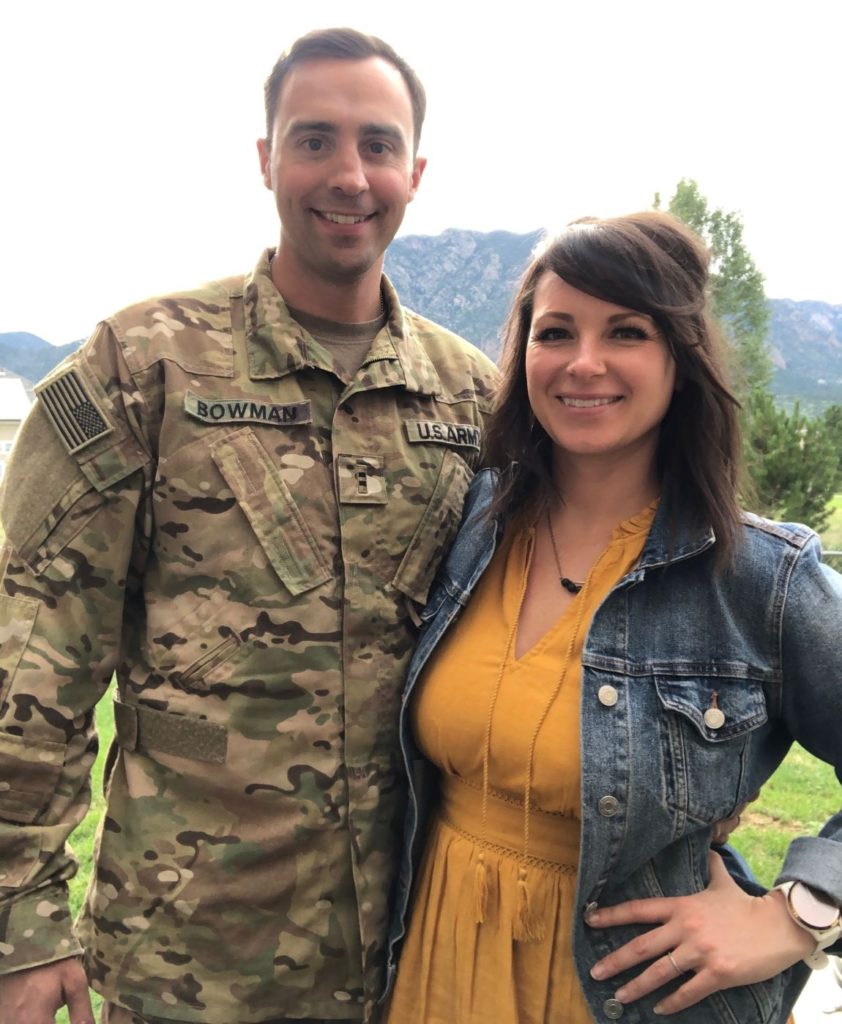 Warrant Officer Will Bowman ’10 with his wife, Ashlee.

After graduating in 2009, Will moved to Indianapolis and worked in a dental lab. Will noted, “Although the work was enjoyable, in the back of my mind I always held the inclination to serve in the military. I began researching and figured that the present was the best time to join, and I did not want to look back later in life and regret not serving.”

So in 2011 Will enlisted in the Army as a Korean linguist because according to Will, “the linguist job sounded the most interesting.” He attended the Defense Language Institute in Monterey, CA where he learned the language and about the Korean culture.

After attending language school Will was stationed in Korea and Washington state. While in Korea he was a crew member on a military airplane, and this sparked his interest in aviation. Will was accepted into Warrant Officer Candidate School in 2017 and was commissioned as a Warrant Officer.  For those unfamiliar with the rank, warrant officers are commissioned officers (in between enlisted soldiers and regular officers in the rank structure) who are technical specialists in a certain field. While at flight school Will trained as a pilot on the CH-47F Chinook helicopter and moved to Fort Carson in Colorado in 2019.

A Brotherly Send Off

Earlier in the year, near the start of the pandemic, Will’s pledge class of 2010 did a group FaceTime where they all had the opportunity to catch up.  Just before Will deployed to Afghanistan, Vince PeGan ’10, along with a few others, organized a video send-off.  Will remarked, “It was special to receive a little message from every single pledge brother (along with a few other friends). It meant a lot and spoke to the bonds of friendship in the fraternity that never go away.”

Will also noted that he has had the chance to work with some great people at Bagram Airfield. One being a fellow Sigma Chi (West Florida University) who works in the building next to his.

Will is unsure of when his deployment will end, but he looks forward to his eventual return to the States and being reunited with his wife, Ashlee, who he texts or calls almost every day.

All his Delta Delta brothers also look forward to Will’s safe return.  We are also very proud of Brother Bowman’s service to our country.