Jim Everett to be Inducted into Indiana Football Hall of Fame

Significant Sig Jim Everett ’86 will be formally inducted into the Indiana Football Hall of Fame at the National Football Foundation Honors Reception to be held September 2.

Brother Everett was selected into the Indiana Football Hall of Fame in 2020, but his induction was postponed to this year due to COVID-19. 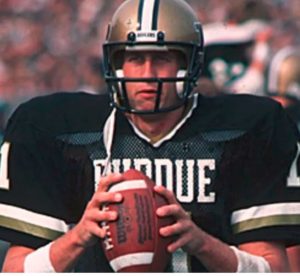 Jim came to Purdue as a highly-recruited quarterback from Albuquerque Eldorado High School in New Mexico. He put up brilliant numbers (7,411 yards and 43 touchdowns) as a two-year starter for the Boilermakers.

Everett was second-team All-Big Ten and third-team All-America, finishing sixth in balloting for the Heisman Trophy and was the third player chosen in the NFL Draft of 1986, picked by the Houston Oilers. He played eight of his 11 NFL seasons with the Los Angeles Rams, where he led the league in passing twice and was named All-Pro in 1991. Everett was inducted into the Purdue Athletics Hall of Fame in 1999.

Tickets for the Honors Reception, including beverages and desserts from Town & Gown Bistro in West Lafayette, are on sale now for $25 per person. Contact Jim Vruggink at jvruggink@purdue.edu to obtain your tickets.

This is the Tiller Chapter’s first year with the Tyler Trent Golf Outing.  Jim Everett will be the event celebrity. Proceeds from the golf outing go to Purdue’s Center for Cancer Research.

Cost is $600 per foursome or $150 per player ($75 for students), covering s shirt, cap, box lunch, golf cart, balls and 18 holes of golf. Tickets for the Honors Reception will be included for all golfers who register in advance for the Tyler Trent Golf Outing on Sept. 3. Contact Jim Vruggink (765-427-3303) for more information.